(This is part two of a Storyjumper activity for Digital Writing Month, where we are handing off stories to each other on blogs and writing the story forward. Bruno W. started us off with a personal narrative, and I am taking part of what he wrote and moving into a story. — Kevin) 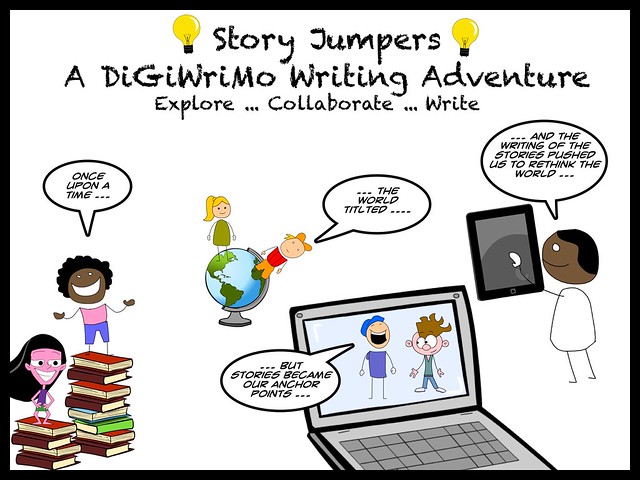 The paper note spilled out of the computer case, fluttering into in hands. I wasn’t expecting that. Not at all. But I was intrigued. Much of the wording on the paper had been smudged by water or by time, or both, but the story itself ended with these intriguing lines:

A few more days later, I realized it was again different: They are more proofs that I didn’t imagine this story, I didn’t dream it or exaggerate it. This part of the story is so trite you barely need a proof, other memories, encounters are more exceptional, surprising that I’ve been relieved to find some tracks of them. Like the sand that you find in the morning, in your pocket reminds you that a dream could have been more than a dream.

Most of my friends know I am someone who takes pleasure in old worn-out devices. I gut them out on my workbench in the basement, working at the insides with some magic that even I could never explain — I just know — finding a way to get the old machines up and running again, pulling them out of sleep.

This particular laptop and case – with the lettering saying “Bruno W., Strasbourg, France, 2015” and nothing more — was retrieved from an old shop that my friend, Sarah, visited while overseas on a trip searching for ukeles. She’s a uke collector. And she calls me strange for my obsession with technology.

My circle of friends, they know my hobby and they indulge me. An old phone. A cracked PC. An iPad with bad battery.  They all come my way eventually. And I often return the favor by fixing their devices for free. Sometimes, it’s only a reminder that “plugs go into the outlet.” Other times, it’s me, digging deep into the engine of the device. Is there anything more pleasurable than ripping out a hard drive? I don’t think so. There’s a certain satisfaction I find with taking apart something that others think can’t be taken apart, to see technology as story of parts.

I think of myself less as a fixer of technology than a reconstructor of stories.

I held the Bruno paper print-out in my hand. It was clearly the ending of some story, of a narrative. I tried to imagine who this Bruno was. I could hear his voice in his words.

Who was he writing to? Was it some loved one? Some invisible audience in the world? Was it a story he hoped others would read? Or was it some private tale, and now, as I read his lines, were my eyes were intruding on a private moment?

I turned the paper over, seeking understanding.

Faintly hidden, no doubt from the passage of time, I saw the faint pencil outline of what seemed to be a map. I held the story up to the light, trying to make the lines more visible. I was reminded of my childhood interest in detective gear, and the trick of writing in lemon juice as invisible ink. I squinted. The light filtered through the paper like an onionskin. An outline emerged. It was indeed a map and on the map, I could just make out some lines of text and a set of arrows that seemed to be leading towards ….

(the end of the chapter. Maha Bali now takes it from here …)