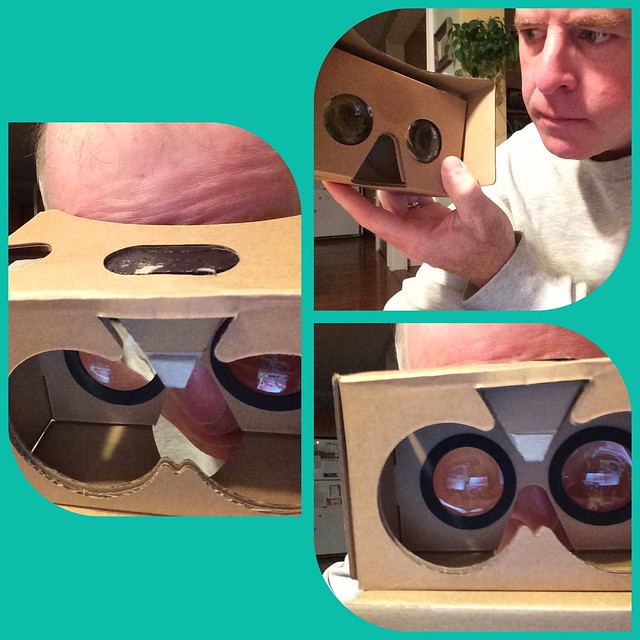 I recently got inspired to check out Google Cardboard, the giant company’s cheap answer to expensive virtual reality technology that may (or may not) transform the way we play games and watch videos, and all of that hoopla.

In an ideal world, I would have downloaded one of the instruction kits and spent my weekend piecing together my own pair of Google Cardboard glasses myself. That would be in true Maker spirit.

Alas, I cheated and paid twelve bucks for a pre-made set of Google Cardboard off of Amazon. I have only just started to tinker a bit with some of the basic apps that come with Google Cardboard (some apps are available for smart phones, which then get placed in the front of the eyebox, on a sort of cardboard slot, and the magnifying eyes you look through zoom directly into the screen of your cell phone … it’s pretty ingenious).

So far, consider me impressed, as the depth perception of the Google Cardboard apps are pretty nifty and immersive. You move your head, and the scene shifts all around. You point your eyes towards objects and use a little clicker on top of the eyebox to click the “mouse.” Things happen. You glance up and start flying through the sky. (There is an app for a planetary tour of outer space … I am going to get that one.)

What I wonder about is how storytellers can use this visual trickery for interesting storytelling that pushes the edges of writing, but I suppose we are a bit too early for that to come to play (or if it has, I have not yet come across the app that will wow me … I admit, I have not yet done much exploring on the Google Play store).

And, given the relative inexpensiveness of Google Cardboard design (really, just magnified googly glass eyes in a cardboard box) coupled with the prowess and creativity of app designers, the possibilities for the classroom might not be as far as off as one would think. I like the potential for storytelling. How would you write for the virtual reality device?

As we explore the visual literacies in Digital Writing Month, it will be interesting to think about places where the possibilities of technology to expand storytelling might go deeper, even if the technology is not quite “there” yet. We take in so much information with our eyes, filtering data and making sense of connections, filling in the gaps of what we don’t see — that this kind of virtual reality possibility might bring on an entirely new experience for us as readers/viewers AND writers/composers.