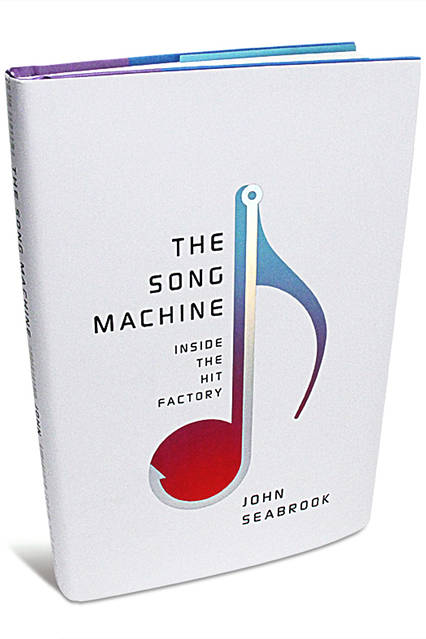 I recently read a great book by New Yorker magazine writer John Seabrook called The Song Machine: Inside the Hit Factory. It’s a fascinating, if scary, look at how the songs we hear on pop radio are constructed together these days, in an era where producers and engineers are more influential than many of the artists themselves.

The concept brought to light in The Song Machine harkens back to the era of the Brill Building, in which songs would be written and handed out to artists, and sales would primarily benefit the music publishers, not the writers nor the artists. Today, thanks to technology, assembly lines of engineers produce what our ears hear: one person might work only on riffs for verses; another on the chord progressions for choruses; another singing nonsensical sounds for melody; another only doing guitar lead parts.

And few of them know where their “parts” will end up because the engineers and producers “stitch” pieces together from vast computer files … creating songs from parts that were composed and recorded out of context. It’s a quilt of disconnected threads, made ear-pleasing by the mixing and splicing.

I was reminded of the book again this week as I was collaborating a remix of a song in the collaborative Soundtrap site. The backstory is this: a student (and classmates) of an online teaching friend has shared out some songs that they wrote as part of finding an audience and pursuing their interests (in true Connected Learning fashion). They found us, in Digital Writing Month. An earlier song led to various remixes. A second song, the one we worked on last week, was a reflective piece that they recorded and shared on YouTube and as I listened, I hoped we could collaboratively remix, record and then share back to the young songwriters as a “gift.”

And we did. A handful of us took the words and chord progressions (which the student shared) and used Soundtrap to record a version of the song, and then another friend took the audio track and created a visual companion piece. I had told the young writer via Twitter that we would be working on the song, but I never invited them into the process.

This lack of direct invitation, I see now, might have been an inadvertent mistake, perhaps, as another online friend who was part of the music collaboration pointed out in a fantastic post about the uneasiness they were feeling about reworking a piece of art without the original artists involved in the collaboration. This friend wondered if we had not taken away something special from the art itself by remixing it.

… it feels like we asked him for a beautiful new thing to play with, then closed the door that we’d opened. He couldn’t even  watch from the window as we had fun creating some magic with his song. We closed the door and let him wait while we had a party.

I don’t quite agree, but the post, as good writing does, forced me to step back and think reflectively about why I didn’t agree with this premise. I could be wrong about this, but here’s why I think our collaborative idea has merit in this digital age of composing and sharing.

Unlike the system of making music in Seabrook’s The Song Factory, we musical collaborators always had a notion of what the song was and what we were doing with it. We were honoring the young songwriters. We weren’t splicing in unknown parts. We were not a factor. Their ideas became the inspiration for what we did. We were creative echoes of their art. We also were in global collaboration mode, layering in tracks together from the United States to the Netherlands and beyond, in an online space, working on the song connected by our networks.

We were working from the heart, and I always knew the song was theirs, not mine. Not ours. Theirs. It was, and is, and always will be, their song. I still see what we did as a gift of an appreciative audience, but I recognize my friend’s trepidation of determining where the line is between the writer and their audience. I have long argued that in the emerging field of digital writing, the line between writer and audience is thin and getting thinner, and that this shift is a good thing. I know not everyone agrees.

“It wasn’t like I wanted to change them because they needed changing,” he says. “But I knew that if I sang them from my perspective and in my voice, they would transform. I thought, ‘Let me record 1989 like it was Bruce Springsteen’s Nebraska.'”

Same here. It wasn’t that the song needs changing. It is great as it is, with the three of them singing and a single guitar. The song stands by itself. It was us, the audience, that changed, by reinterpreting the song in a gesture of appreciation. I understood the song deeper once I started to play it. Recording it brought me even further into the theme and the words of the song. It was not theft or misuse of ideas, in my opinion. It was learning.

The song is theirs. It always will be theirs. It was never ours. I am happy for that.

PS — Irony Alert: Swift recorded parts of her album with the same folks who are featured by Seabrook in The Song Factory.

PSS — I invited the young songwriter into the Soundtrap file this morning, with this note:

PSS — I also asked if they wanted to reverse-engineer a song of mine, to interpret it as they see fit. I followed their example, doing a simple demo on YouTube.