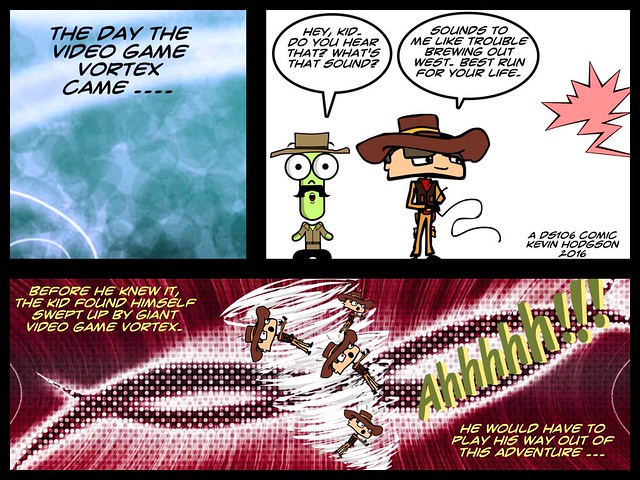 I am nearing the end of this two-month run of making comics for The Wild West Adventures of the Internet Kid. This has been an ancillary project for the Course with No Course — a Western-themed offshoot of DS106. It has been a ton of fun to make these comics, but I don’t know how daily cartoonist do it, to be frank. The stress of new ideas … ack …. good thing I don’t do my own art or I would have gone mad weeks ago.

Today’s comic begins the last storyline, which will stretch out over a few days and invite you to take part in the story, too. It features The Kid and a Video Game Vortex coming to town.

You can view the Internet Kid Tumblr site, where I have been posting the comics every day (as well as on Twitter, with the #Western106 hashtag). You can also use the “random” option with Tumblr, so that when you click the link below, it will take you to a random comic at the site.

Get a Random Kid

While this is the last storyline, I suspect that this pause in making daily comics is only for now, and not forever. It’s hard to give up a character like The Internet Kid and The Horse with No Name and Anarchist Annie and Question Mark and others after living with them for seven weeks or so. They’re in my head, and in my heart.

Peace (in the frame of story and humor),
Kevin