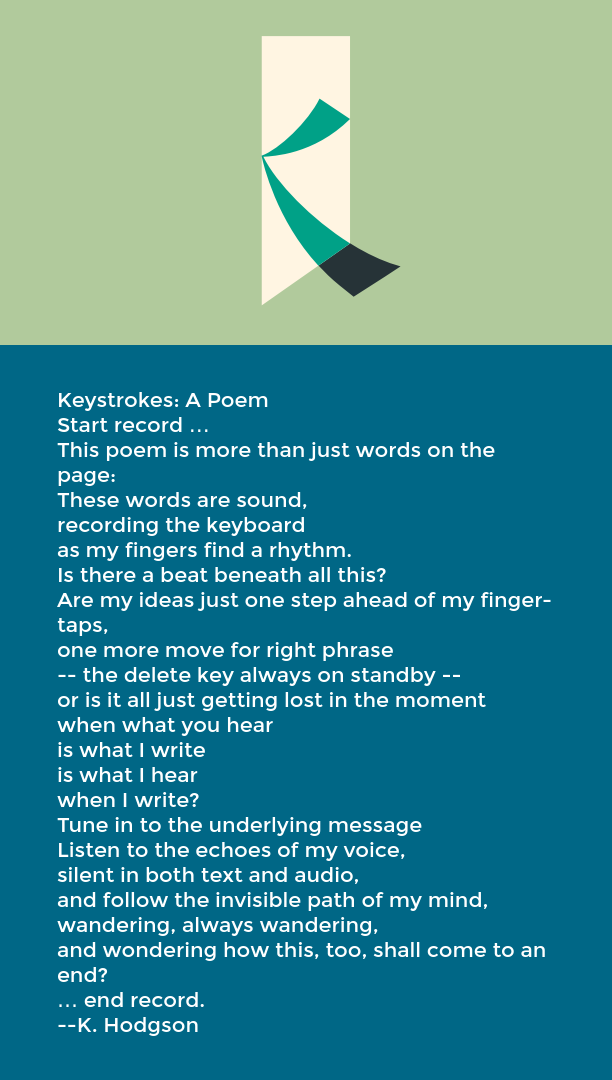 Yesterday, thanks to a wintry late start at my school but not at my sons’ schools, I had time before school to work on two sound stories. One of the stories was the third Learning Event for the HearMyHome project, and the other was an assignment for the DS106 Daily Create.

The Learning Event for HearMyHome (which is exploring the ambient audio of our lives as literacy moments) asked participants to find some rhythmic audio that represents their day, in some way. I had already done my morning coffee maker (!) but wondered how I might capture the sounds of my writing morning routine.

Simple. I turned on Audacity, opened up Google Doc, and began writing a poem about capturing the keystrokes of writing a poem. I then posted the sound with the poem, called Keystrokes. It is strange to hear my fingers cranking on the keys as the meta-poem unfolds (some slight editing happened after the recording ended, just to be honest) …. but there it is: a fair aural landscape of my writing mornings.

Second, the Daily Create at DS106 asked us to be inspired by a SoundTransit audio file. At the SoundTransit site, you can pick geographic points and create an “itinerary” and the site will piece together ambient sounds from those places into a single file. Cool. Then, the prompt asks us to write a story, inspired by those sounds. I wrote a story about traveling from Beijing to Boston, with a stop in Kyoto, but then folded it into the soundscape itself, sharing it out as an audio file.

Peace (is what we hear),
Kevin