I almost feel like writing a requiem for my baseball glove. It’s been with me longer than just about anything I own, other than my saxophones. Since college, when I bought it for some pick-up baseball, my Wilson outfield glove has come with me from here, to there, and finally, here. I’ve spent countless hours in my backyard with all three of my boys, tossing the ball. I’ve used it as a Little League coach, on ballfields in our city.

The glove … it has stories to tell. There was that time I left it on the ballfield and a week later, someone at another ballfield asked if the glove he had found was my glove. It was. And it felt like my dog had come home after being lost in the woods for a week.

Many people looked at my glove over the years, asking “Whose huge glove is this?” I never felt it was big. Not until I put my hand in other people’s gloves. Theirs always felt small. Mine always felt just right to me. It’s amazing how we grow to love what we have, right?

But, alas, the glove has not weathered well in the past year. First, the leather ties began coming undone. I could fix them a bit, with a little creative repairs and odd weaving patterns that left the glove looking like it had tails coming off the nettings. But then the leather strands began to snap on me. And even worse … the webbing in the middle began to fray and come apart. That was unfixable. Still, I played with it. 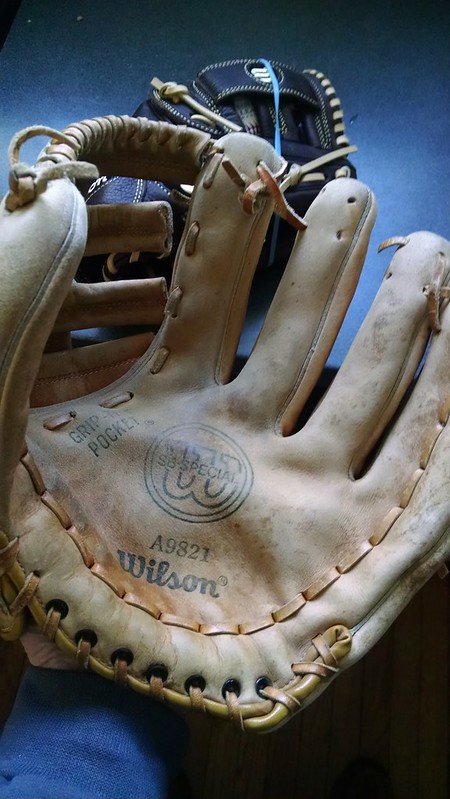 It was only when my high school baseball son zipped a ball at me at a speed that required reflex, and the ball almost came right through the netting — it would have come through the netting and crashed into my face — that I realized, the time has come to retire the old man and bring some fresh legs into the game.

Yes, I got a new baseball glove yesterday, and it doesn’t feel right at all. Sure, it’s comfy enough and the pocket seems fine. The new Wilson infielders glove is great. It’s just …. not the old glove.

Peace (in the netting),
Kevin