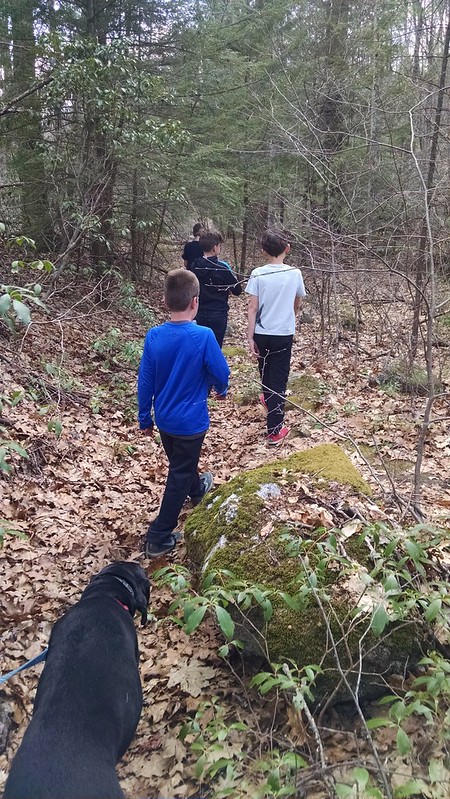 We were nearing the end of a two-hour hike in the woods. Three 11 year old boys. The dog. Me. The sun was shining, keeping the bite of Spring at bay. No bugs were bothering us. The boys had crossed a small river twice, scaling their way over fallen trees, calling out encouragement to each other. One even took off his shoes and walked through the cold water, balancing on mossy rocks. They had played Manhunt, hiding among the rocks and trees.

It was a Grand Adventure.

“Well, this has a been a Timewaster,” one of the kids told me. I don’t think he was jonesing to get back to his video games or anything. He was the one who took off his shoes to dip toes into the water. But I don’t think he is used to such lengthy unstructured “wanderings,” either.

I stopped dead in my tracks.

“Spending two hours out here” —  and I pointed around me at the beauty of the woods — “is never a Timewaster,” I told him. The dog looked up at my voice and then the trees, as if noticing the woods for the first time, too.

“Nope,” I added. “Time in these woods is never, ever wasted time.”

The boy (not my own, by the way) looked at me in an interested way, sort of nodded, and kept on walking. I followed. The dog was happy to keep moving, too. We all were.

Peace (outside the inside),
Kevin