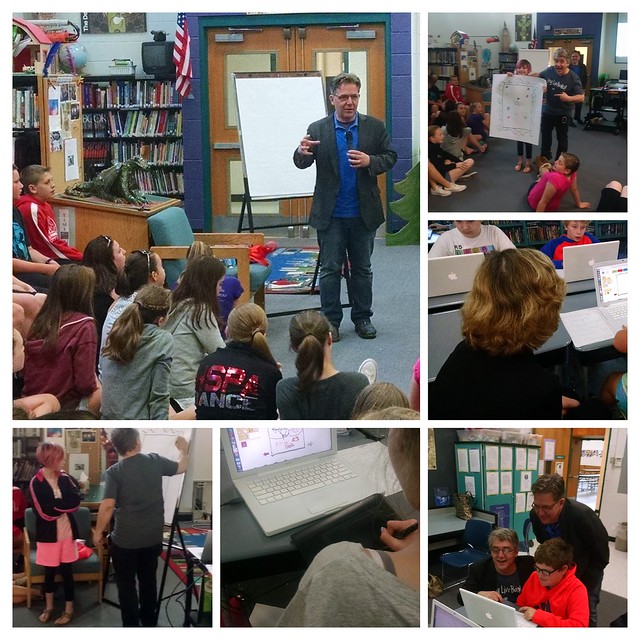 Is there anything better than bringing some talented guests into a classroom and school who then urge everyone in the room, teachers included, to lead a creative life full of possibilities?

That was the clear message from writer/illustrator Peter Reynolds and his equally talented brother, Paul Reynolds, as they visited my school to observe students working on a digital picture book site and to give an uplifting presentation to all sixth graders.

My students are using an early iteration of a platform that the Reynolds’ media company — Fablevision — is testing out as a means for young people to write and publish a book. (I’ll write more at some later date about that). Peter and Paul, and their sister Jane, who leads a school in England, and Andrea, who works at Fablevision, arrived at the start of the school day, and watched my students working on their digital picture books. My National Writing Project friend, Judy Buchanan, was also there, as NWP is my connection to Fablevision. 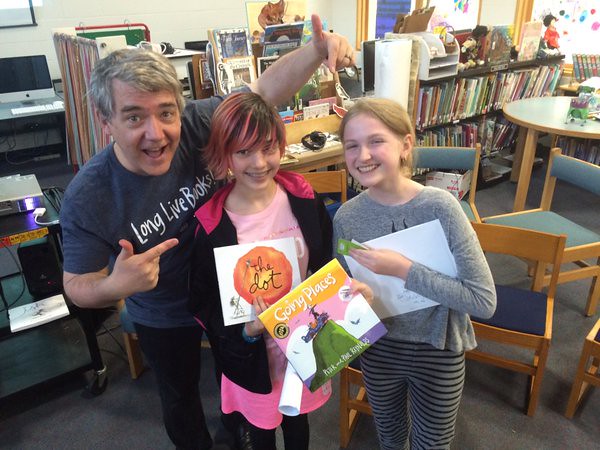 There were so many positive interactions, it’s hard to pinpoint the power of my students not just meeting a very famous author/illustrator, but also, to get to chat personally with him and to let him, and the others, read their draft stories. I had a whole group of students beaming all day, and walking on air, because they got some advice and support from Peter Reynolds. 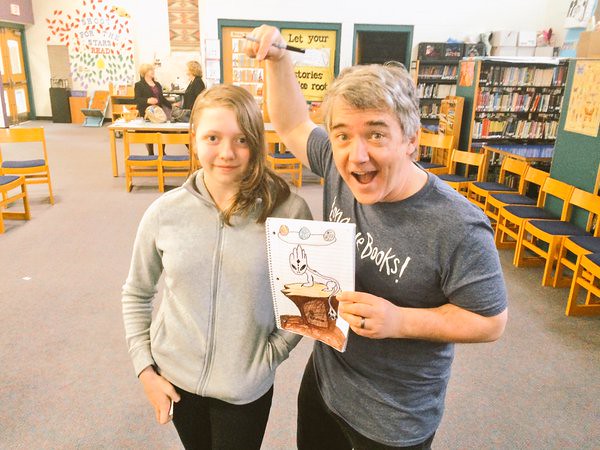 In the presentation to the entire sixth grade, both Reynolds exuded positiveness about possibilities of the world, and encouraged students to use their imagination and to imagine the possible. When asked what his favorite book was when he was growing up, Peter Reynolds pulled out a blank book, with empty pages, and said, This was my favorite book. The kids loved that.

The Reynolds’ message and Fablevision philosophy– which resonated with many of students, as evident by our discussions later and the energy level for the rest of the day — was quite the opposite of that.

Peter Reynolds talked of being a dreamer as a student, of doodling his ideas. He described how “When I read words, they turn into pictures in my head.” It was Peter’s math teacher, who told him to illustrate a math concept that led to Peter creating a comic book that led to his first animation movie as a 12 year old that put him on the path to writing books such as The Dot, and Ish, and many more (including the illustrations of the Judy Moody books and the Stink books).

We need more creative thinking, not less, and I applaud the Reynolds and Fablevision for staying true to that philosophy in all that they do — from books to software to video animations and more.

Peace (in deep thanks),
Kevin