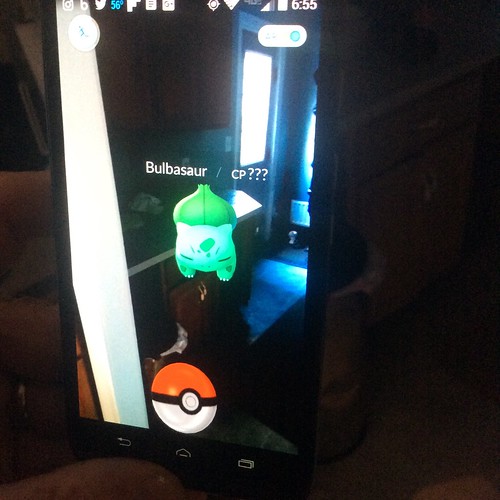 NOTE: I am writing this to try to understand this ….

Like many of you, I have been intrigued and bewildered by the sudden explosion of Augmented Reality with the release and wild popularity of the Pokemon Go app game. For me, my awareness of the game began when Joe Dillon (noted CLMOOC Pokemon Scholar) wrote a fascinating blog post in which he tried to examine the use of Pokemon Go through the lens of Connected Learning.

I’ll echo what I saw in a headline from Rolling Stone magazine later that same day: WTF is Pokemon Go?

Within hours of reading Joe’s post, I was bombarded in my news feeds about the game. I dropped my youngest son off at his camp, and his teenage counselors were playing it. I helped with summer baseball that night, and groups of kids were playing it. The game was featured in a front page story in our local newspaper (written by college intern journalists .. it takes young people to notice a pop culture phenomenon at times).  It was everywhere. 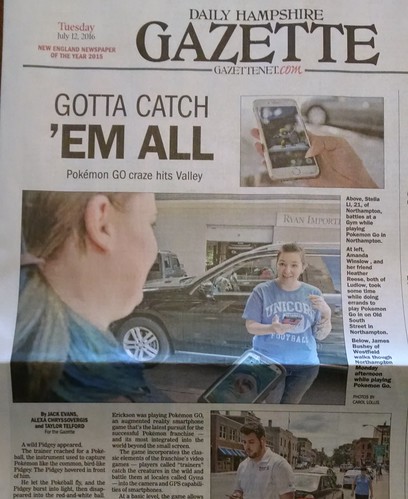 So, I downloaded the game, to check it out. I am pretty darn confident that most of my upcoming sixth grade students are either playing it or know about it this summer.  It doesn’t make sense to ignore a cultural moment. I wanted to know more.

You probably know as much as I do about the playing of the game itself (if not, and are interested, just Google Search it.) For starters, I found a Pokemon floating around in my kitchen. I tossed the red balls and captured it. I tried the game again when I was in a nearby city, visiting some writing project teachers, but felt strange in the parking garage, staring at my screen and walking in circles. In the meeting, a bunch of teachers were talking and joking about … Pokemon Go. 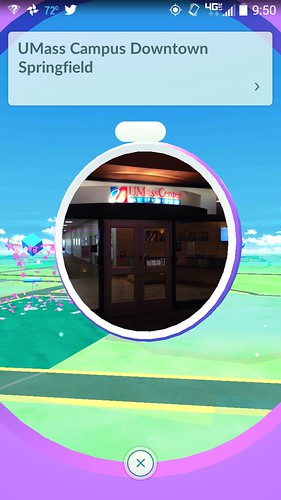 The next day, the negative sides of the app began filtering out, with news reports about robberies and accidents, and all the usual stuff that sparks the adult anxiety that new technology always leaves in its wake when young people (and in this case, older ones, too) are consumed with something new. None of that changed my impression that, as a father of three boys who were somewhat into Pokemon when they were younger, the game probably was connecting people in an interesting way with technology and game play.

What concerned me more than all of that (as it should you) was the privacy issues, and the collecting of reams of data by the company from its users, and the way the game seemed to want access to my entire Google account. (I believe the app update fixed that with an update, but I had uninstalled it).

Here’s what interests me more about this particular moment than Pokemon Go itself — which may or may not turn out to be little more than a technology fad in the summer of 2016.

What if this sudden interest in Pokemon Go spurs young people to suddenly realize how the layering of visuals and information on the physical world could be another way into digital composition, and they begin to find ways to do this on their own? I shudder to think of a class with iPads doing Pokemon Go as a learning experience (that might be hard to justify on all sorts of levels), but I could celebrate a class with iPads making their own Augmented Reality apps or stories or scavenger hunts.

Some apps, such as Aurasma and others, do this on a smaller scale. The use of QR codes replicates the experience, somewhat. I don’t pretend to know the technical aspects to pull off what I am thinking. Combining GPS with media, accessible via mobile devices, in different places … sounds complicated to me. But intriguing, nonetheless. It’s that flip from media consumer to media creator that we should all be looking for.

Joe Dillon mentioned in a response on Twitter that National Parks and community open spaces would be a perfect fit for this kind of Augmented Reality creation, as people explore the natural surroundings in their own communities on another level — either as hunt for information, or maybe just an augmented way to view the space. Imagine if you could pull up the historical story (ideally, of all perspectives of the story) of a place or object. Imagine if you could redraw the park in new ways. Imagine the planning process, the tinkering, the trial/error, the beta-testing …

Imagine the possibilities … or it just might be another technology pipe-dream that always seems like there is something transformative coming (see Audrey Watters for her extended examinations of the Ed Tech World always promising revolutions in learning). Or, alas, it might just get co-opted by private ventures who make money off our data by tracking our GPS coordinates to target us with AR advertisements.