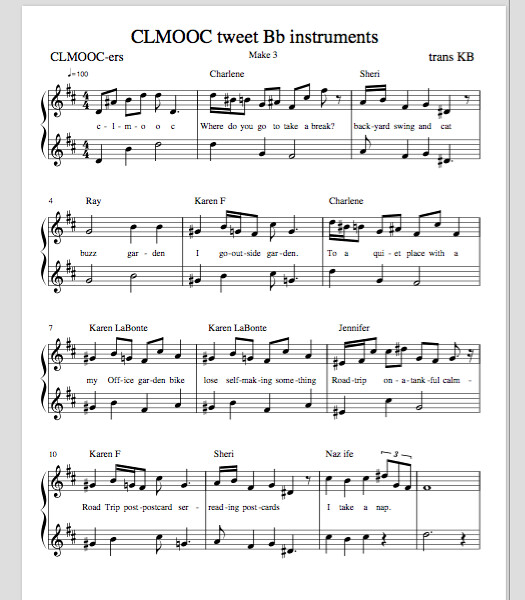 I feel honored to meet so many interested and creative educators in the CLMOOC. Since last week, Karon B. and I have been engaged in an intriguing email conversation that falls under the umbrella of this week’s concept of “Curiosity Conversations” in Make Cycle 3 of CLMOOC.

Our interactions began with a Daily Connect, themed on “reaching out” (which she did), and then took a path towards presence in social media spaces (or, rather, non-presence and how that feels), and finally our back/forth reached a point where we worked on a project together that turned tweets into music.

Actually, she did all of the compositional work, and I just followed her lead as best as I could. This is what she did, in a nutshell, and where we have sort of ended up. For now. She is still working on other versions.

Karon is not on Twitter, for her own valid reasons, but she has followed the weekly Twitter Chats through the curated Storify projects that we put together afterwards. She has also been tinkering with a musical notation program, and so, she wondered if she could take the Twitter feed from the CLMOOC Twitter Chat and code the tweets into musical notation, and then create a “song” of the Chat.

I thought that was a pretty cool concept, and she went about it with an intense passion that I admire. I still don’t quite understand her coding system (sorry, Karon!), even with many intriguing emails back and forth as she worked hard on the project. The five-page music manuscript of the Twitter Chat is so interesting to read through, as themes emerge and counter-melodies of people and ideas. 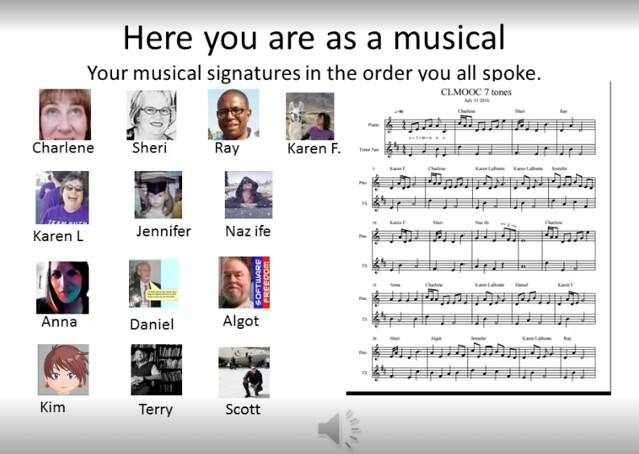 You get a perspective of a Twitter feed that you don’t get in any other way. We’re slanted, on an angle, and see the sharing as music. How friggin’ cool is that, eh?

I wanted to do something with Karon’s manuscript. I wanted to find a way to turn her music on the page into music for the ear. So, using Soundtrap recording platform, I tried to record the song with my tenor saxophone, layering the top melody with the bottom harmony parts. I fumbled many times, and still don’t like this rough cut version. But I hope it gives you an idea of how the sharing from Twitter turned into music on the page turned into sounds for the ear.

Thank you, Karon, for pushing my thinking about music, social media, and composition over the course of the week, and reminding me of how creative we can be when we think beyond the normal. She saw Twitter as an inaccessible point, and turned it into music.

For more on her project, check out the slideshow video she shared in the CLMOOC Google Plus space. She used a midi sound generator to create an audio soundtrack for her presentation, too, so you can “hear” what each person “wrote” in the chat. Nifty.