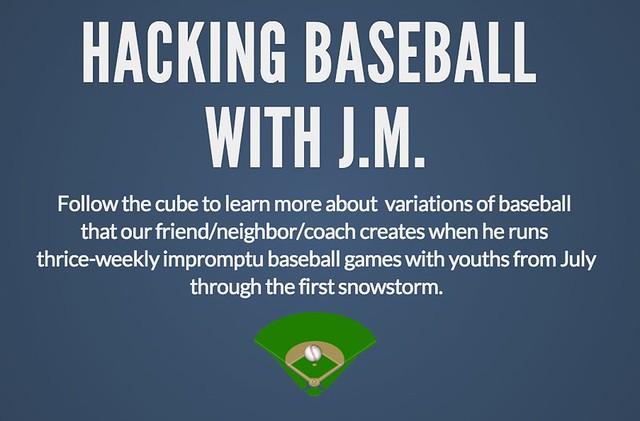 (A project I made in CLMOOC a few years ago, with Jim as the inspiration)

We arrived, my son and I, by bike, on the field, just before 5:30 p.m. with baseball gloves in a backpack. It was Monday night, time for the thrice-weekly Summer Ball pick-up game fun by our neighbor, Jim. But no Jim. Instead, a sign hanging on the fence, with Jim’s scratchy writing, said “Jim has some family business. Equipment in the green box. Have fun.”

Jim left all of his equipment at the field, and I was the only adult around. All the other kids — about 14 of them by now — had come by bike or their parents had dropped them off, and left. I had brought a new book with me, thinking I would enjoy some reading time while Jim led the kids in the craziness of baseball in summer. Sometimes, there can be nearly 30 kids on the field.

“I guess we can still play?” one older kid said, almost uncertainly. “Jim left the stuff. And a note.”

“OK,” another responded, as two younger kids grabbed the bases and began to unplug the field in order to anchor the bases at first, second and third. “We can make teams.”

“We just need someone to pitch,” the older one explained. In Summer Ball, Jim always pitches, to keep the game moving along and avoid squabbled over the pitching mound.

I stepped up in the quiet. They were looking at me, anyway. “I’ll pitch,” I said, putting the book away and taking out my glove, which I had brought just in case Jim needed a catcher. I stretched my arm, trying to remember the last time I pitched to kids. At least a year or so. I didn’t coach this past spring.

It showed. But I kept at it for nearly two hours, one pitch after another (a few out of control, but no kids were hurt) and they were pretty good-natured about it. The kids just wanted to play, so they just let me pitch. They hit and hit and hit, with the older kids cranking a few homerooms over the fence. They do that to Jim, too, so I didn’t feel so bad.

“This arm is going to hurt in the morning,” I told my son, who just laughed as I kept stretching after the game. I was right. My arm hurts this morning. Soreness in the shoulder. But they got to play baseball on an August summer evening and I got to go in as relief for Jim. As a reward, my son and I stopped for ice cream on the way home.

Some things are worth celebrating …

Peace (on the mound),
Kevin