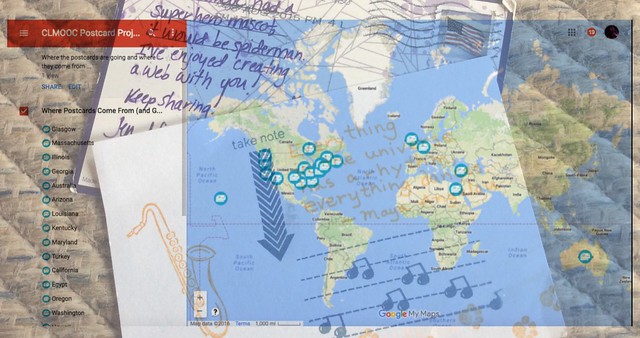 One of my favorite post-CLMOOC (Connected Learning MOOC) connections is the Postcard Project. I’ve written about it before. Last week, Wendy Taleo wrote a very interesting poem, after “reading” the stamps on the postcards making their way to Australia.

I wasn’t the only one who wondered of Wendy’s poem could be remixed into a song. Ron L., one of my regular musical companions and gifted artist, also had the same idea. So I took a chance at it, and boy, it was a bit more difficult than I thought. Mainly, I had some struggles because they were Wendy’s words. I didn’t want to change what she wrote too much ( I did ask her permission to remix and she graciously gave me the go-ahead, noting too that all of her material is Creative Common licensed.) I tinkered with words and phrases. 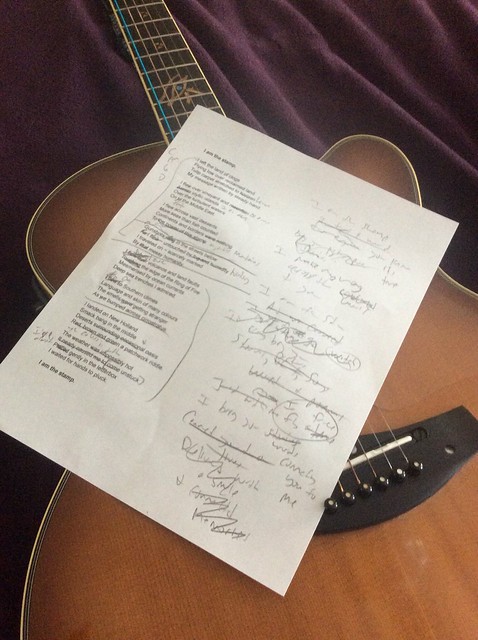 The final paper had lots more of those scratches. The difficulty was finding rhyme and rhythm to my guitar part, while still maintaining the Wendy-vibe of the poem. The result was a chorus that I wrote, and then a sort of Dylan-like singing of the verses to make them fit into the structure. Some parts work better than others, as song, in my opinion, and I wish it all worked better than it did.

I told Wendy and Ron I would try to make a demo of whatever I came up with. Here it is:

Still, despite my own “hearing what could have been better in my recording,” I love the concept of a song for the stamps on the postcards that we send, and the personification of the object as it travels through the world, bringing words and stories and art to each of us in the mix.