I’ve spent the last week or so making another push to create a series of Distorted Graphs as a way to engage with the politics of the US Presidential Campaign. What I am doing is creating graphs and charts that look sort of real, but which have no data underneath. I am making it all up.

Mostly, I am seeing how I can use visual misinformation (which I clearly label on all of the graphs) to make a political and satirical point about the state of politics. I am also curious to see how something sort of polished might appear to be true, and how to remember not to trust my eyes with charts and graphs and polls and such. Although I try to poke at both sides, I don’t try to be “fair and balanced” with it.

But I am having fun. So there.

This round (done entirely in Haiku Deck and exported out as image files) began with an interview Donald Trump did about his “regrets” over some of his comments. Who really believed that? Seriously. 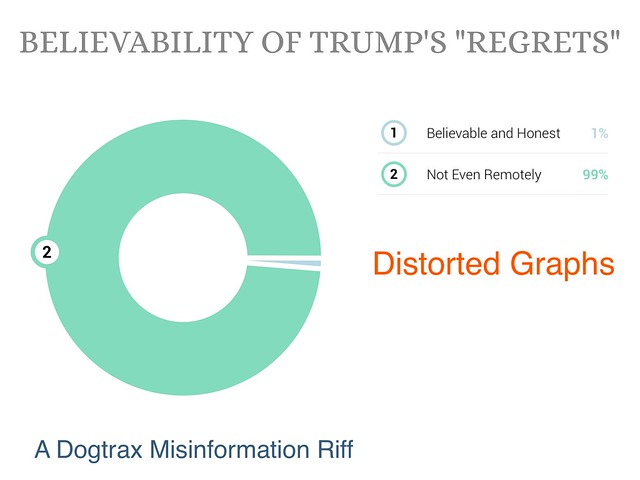 I was wondering where Bernie’s folks have probably gone. Then I saw the news that he bought a $750,00o summer home, and the word “hypocrite” started to flow from my GOP friends. Would Bernie be inviting all those young people to his $750,000 home for a little summer break? I doubt it. 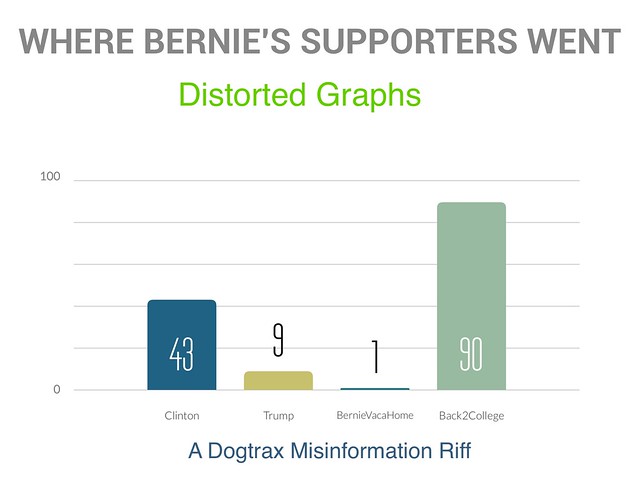 The presidential debates are coming soon. Will they tackle important issues? Or will the idea of wondering what Trump will say trump anything of substance? 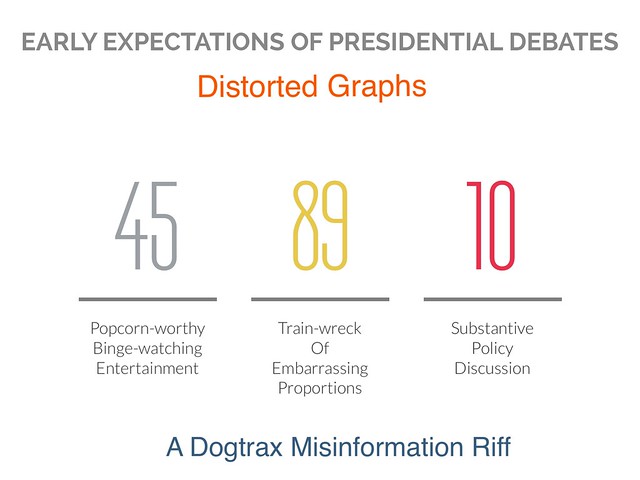 I had a strange moment when I could not, for the life of me, remember who Clinton’s vice presidential running mate was. Really. Then I thought, it can’t be just me. (Note: his name came back to me not long after I forgot it. I didn’t Google it.) 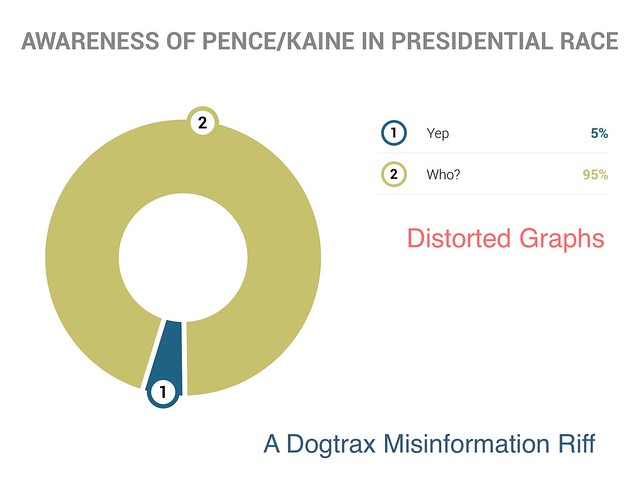 All of Trump’s rhetoric over “rigged elections” and “rigged polls” had me looking at my own Distorted Graphs. Rigged? Well, yeah. 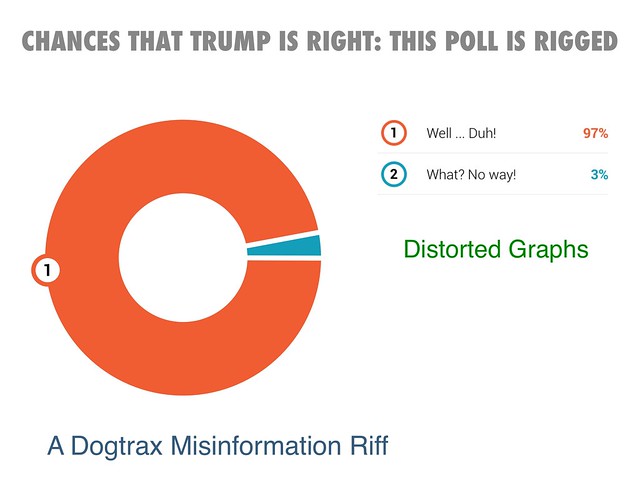 The Clinton Foundation is still a headline. I wondered if there was talk about changing its name. The “staff” referenced here is rather nebulous — did I mean I secretly polled the staff of the Clinton Foundation or my staff here at Distorted Graphs? (Hint: One of those organizations has more than one person. The other does not.) 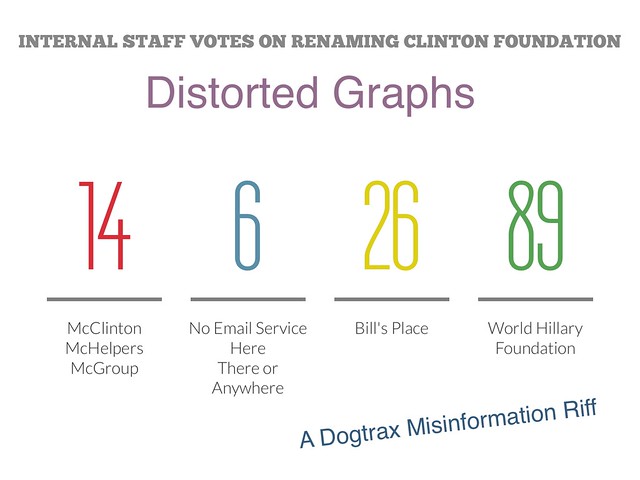 Just the idea of Trump flipping and flopping, and then getting heat from his own party and supports for it, is worth a graph. 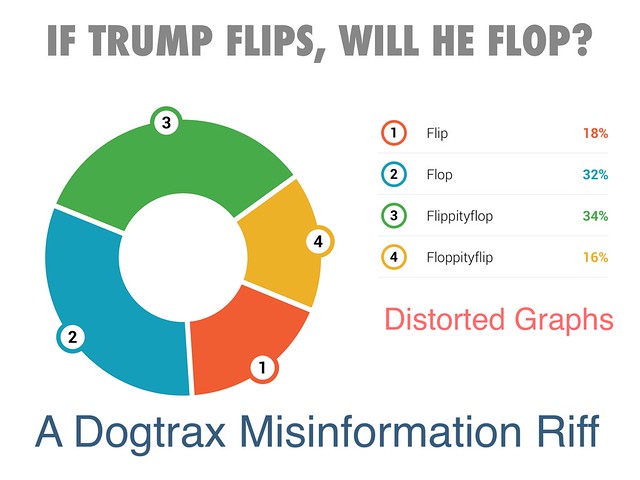 The most ridiculous stories in this latest news cycle, I think, has been one questioning Clinton’s health. One can’t help but hear Monty Python in the head (“I’m Not Dead Yet”) as this foolishness goes on. 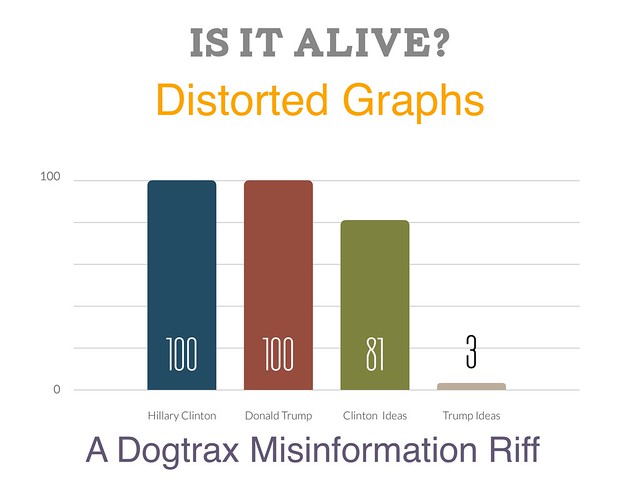 Peace (we always tilt towards it),
Kevin

PS — here is the entire collection of Distorted Graphs, which began in the Primary Season