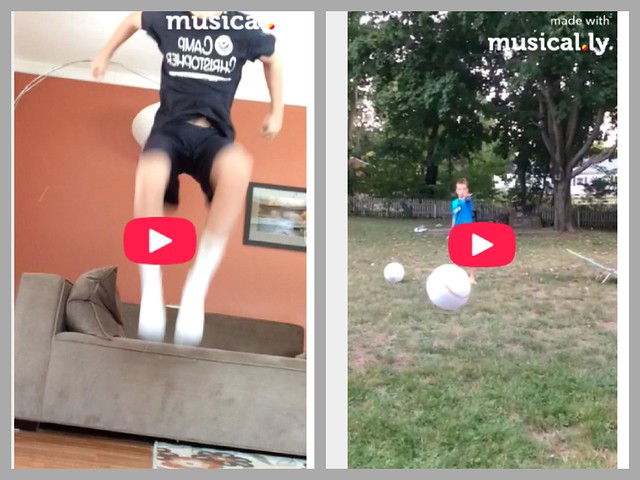 My 11 year old son has really enjoyed making videos with the Musical.ly app this summer. If you don’t know what it that is, Musical.ly is a lip-syncing app, which provides short bursts of song that the user creates an equally short video for. Most people lip-sync the song and share within the community. Tons of kids are using it.

I was going through the videos my son had been making (nearly 100 now), and I was laughing at his sense of humor. His friend was over this weekend, and they made a very interesting one, that was shot entirely in reverse, as his friend catches some inflatable baseballs and items while grooving to a song. A sort of trick-camera thing. I thought it neat, but it might just be a simple tweak of the app. I’m not sure.

(Note: I asked later the boys about it. It was done in the app. So much for hacking the app for creative video editing.)

I also get a little antsy, though, in how my son, entering his middle school years, gets caught up in the number of viewers and likes and all of the suitcase luggage of social media (thumbs up, plus, etc.) on his work (not just here in this app but also in other platforms) that doesn’t really designate anything much in reality. He sees it as “someone is watching what I am making” but I suspect it is an ego thing, too. He wants to be popular, and he sees technology as one of the ways to be “cool.”

We’re already overhearing conversations about “how many views do you have?” and “how many videos have you made?” as if it were all a cold numbers game.

We’re trying to temper that impulse for “likes without context” with discussions at home, as best we can. He’s always enjoyed making movies, and has regularly written and produced videos himself with friends. (In fact, he is finishing up the editing a video that he and this same friend shot over the weekend.)

This Musical.ly app is designed for short videos, and I hope that it doesn’t suck dry the creative fountain for his desire to make longer video productions. I hope, instead, it gives him more ideas that he can use elsewhere.

And sure, he’s having fun with it. That’s important, too.

Peace (in navigating the world),
Kevin