(This is a Slice of Life story, which is a regular feature at Two Writing Teachers. Come write with us.) 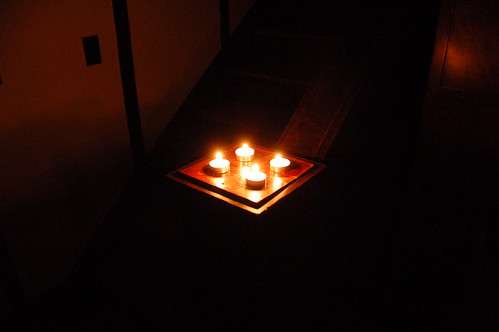 We lost our power the other day. A huge tree crashed down across the main roadway, taking down wires. Sparks everywhere. The police set up roadblocks and traffic was zooming through our quiet neighborhood. It was a mess. And the electricity loss was going on five hours when my wife looked at me and said, We should start the generator.

We were both worrying about the Ben & Jerry’s in the freezer, you know.

We bought our home generator about six years ago, after a winter storm knocked out our power for nearly a week. The sump pump stopped working, and well, if you have a basement that needs a pump, you know you never want it to stop working. So we invested in a generator and paid to have an electrician wire the house for it.

And once or twice a year, I kick the thing into gear in the driveway to make sure it can start. But we have never ever had to hook it up to the house and actually use it. On one hand, that’s good. No big storms. On the other hand … we paid a lot to get it set and then we never have to use it.

But I have to admit: it stressed me out to finally have to hook it all up. I was reading my handwritten notes to myself about how to do it — which breakers need to be pushed where, and so on. I questioned my writing. What did I mean “push it left”?  The last thing I wanted was to be fooling around with electricity.

We did figure it out, and got it work. But you can prob guess the end of this story. One minute into getting the fridge and pump and lights up and running on the generator, the electricity came back on and we were back to normal again.

At least I remember now how it is done. I hope I don’t have to worry about it for a long time, though. (And this time, along with notes, I drew some pictures for my future self.)