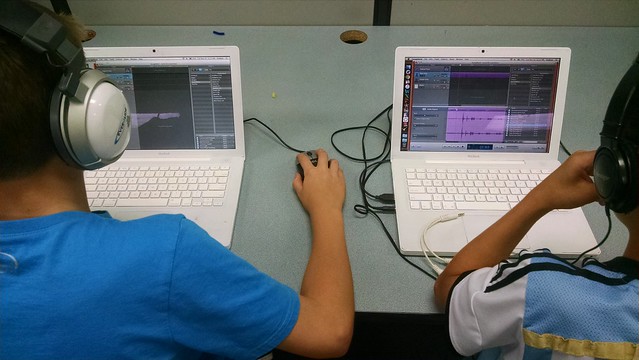 “Read the sentence out loud. Speak it to your dog or cat. Or find a corner and read it to yourself. Your ear will hear if something is not quite right. Your eyes might miss it.”

That was me, talking to my sixth grade students about some writing last week, during a vocabulary lesson. The lesson has to do with different forms of words in context of a piece of writing and many students struggle with this task because they can’t “hear” the sentence as they “read” the sentence.  They only insert the root form, not past/present/future versions. I keep urging them to get the words into the air — their ears will help.

This coming November/December, I aim to do Sound Stories with my sixth graders again. It was so successful last year, during Digital Writing Month, as it allowed me to teach the interconnections of writing, voice, sound and media editing, as well as publishing. We don’t do enough with voice in the classroom.

This week, for #DigiLitSunday and as part of thinking of innovative teaching practice for the #IMMOOC (Innovator’s Mindset), I am exploring the notion of “audio voice” for revision because I think having students use their own voice recordings in order to revise their written draft work may be a powerful tool for them to use as young writers. Just to make clear: there is another concept we call “voice” when it comes to writing – that of the writer’s voice and tone as surfaced in the writing through vocabulary choice and other techniques — but I am thinking very literal here.

I’ve been kicking this idea of voice for revision around for years, thanks to some work done long ago by a Western Mass Writing Project colleague, who used little voice recorders to help her students revise their writing. I always thought she was onto something interesting and powerful.

I’ve introduced Voice Typing with my students (via Google Docs) and we’ve done some podcasting throughout the year. We’ve had students use Dragon Naturally Speaking so that they dictate and it types for them when they are struggling writers. And the Sound Stories  project– where students have to use Garageband and list of sound effects to write and record a story — has been another way for voice to come into the mix.

But I haven’t yet fully explored how a student writer, during the editing process itself, records themselves reading the rough draft text, and then uses that audio of their own reading to deeply analyze the text itself on a second read. They are their first reader. This seems obvious, but it is not. Many students don’t read through, with close reading eyes, their own writing.

Some guiding questions I see surfacing from this audio-revision concept:

There’s so much learning, and teaching, swirling around in those questions.

The problem, as always, is time to do it, but I need to make time if I think this might improve the editing and proofreading skills of my students, right? I need to give them as many strategies for improving their ideas and writing. They need an entire toolbox. Their voice might be another tool in that box. (We won’t get into the discomfort many have about hearing their voice .. but it is something that will come up in the classroom setting.)

Certainly, there is no shortage of ways to record voice. Audacity. Garageband. Vocaroo. Soundcloud. There are tons of apps and programs for recording voice. What I want is simplicity — the fewest bells and whistles possible, so that students focus only the sound of their own voice and the words on the page, where the two converge and where the two diverge.

I am inspired by the work of Dawn Reed, who has been writing about the use of podcasting and This I Believe audio essays in her high school classroom for some time. At the National Writing Project Digital Is site, Dawn shared out this observation that connects with my thinking on this issue. Here, Dawn writes of the moment when one of her students made this connection between his voice and the writing on the page, and how one can influence the other:

When we started this podcasting project, however, Jonathan told me he was amazed by how the recording of his speech made an impact on the way he viewed his voice. He also told me that he had never read his work aloud before, and he was impressed with the role it had on his revision. Without the step of the actual recording of his voice, Jonathan skipped the reading aloud of his work. It wasn’t until he needed to record that he saw the value in reading his work aloud, and he additionally listened to his voice, which gave him insight on his writing and revision strategies. In this way, digital literacies have become a revision tool for Jonathan. It was when he heard his voice being played in the recording that he noticed himself not sounding real or genuine and that’s when he went back to revise the piece in the print and spoken text in order to have his writing and speaking show his voice. Through this process, Jonathan affirmed the role of his unique voice in his print and spoken essay. — from Digital Is, via Dawn Reed

That’s what I want from my students, too.