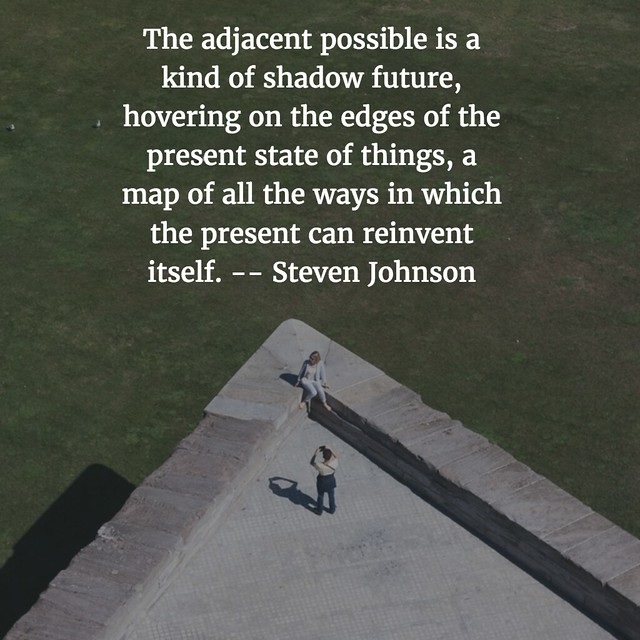 My good friend and creative partner on many an online writing adventure, Terry Elliott, has been using the term “Adjacent Possibilities” for some time now. The term first originated by scientist Stuart Kauffman, I believe, but Kauffman’s insight was centered on scientific inquiry and discovery. Terry has been mulling over Kauffman’s ideas in other realms beyond science, such as writing and creating. (And Steven Johnson has written extensively about it, too).

As I understand it, the idea of the Adjacent Possible is that one kind of creative idea spills over into another kind of creative ideas, and that spills over into another creative idea. And so on, so that what happens when you explore something new is that your ending point (if there ever is one) is a few, or many, steps away from where you started, and perhaps miles away from where you thought you were going in the first place. It’s sort of like Six Degrees of Separation, but with ideas and not with people.

Terry brought the term up again the other night during the Q/A session of my keynote presentation for the 4T Virtual Conference on Digital Writing as he took the mic, and then later, in a private message, he expanded the notion even further.

What he hopes — what I hope, what many of us hope — is that the attendees of the conference and the keynote session do not replicate the kinds of Digital Writing that I shared out. Instead, they will be inspired to make their own kinds of writing. The Adjacent Possible is the notion that we don’t just replicate what we see. Instead, we riff off our discoveries and shift into something new. 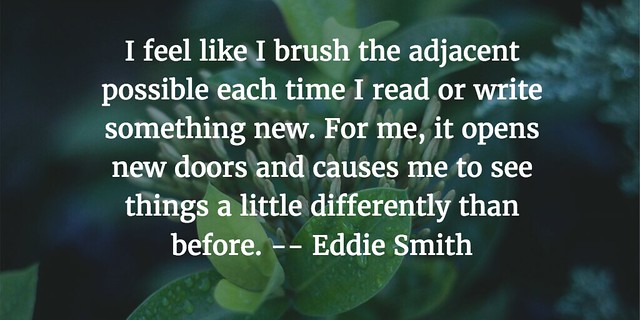 I’ve written about this from another angle, too. It has to do with bringing in Mentor Digital Texts to my sixth graders, and then noticing how many of them just clone what they saw me share out. Of course, they do. We all start there. Hopefully, then we branch out. For example, I began playing guitar and then shifted into writing songs by ripping off the chords and melodies from bands I loved. Eventually, I began to make my own moves, and left those recognizable chord structures behind. I found my own muse.

Helping my students as writers find and then make their own moves, to discover what is not yet visible, is part of why I got into teaching, and why I still love being in the classroom with 11 year old writers. 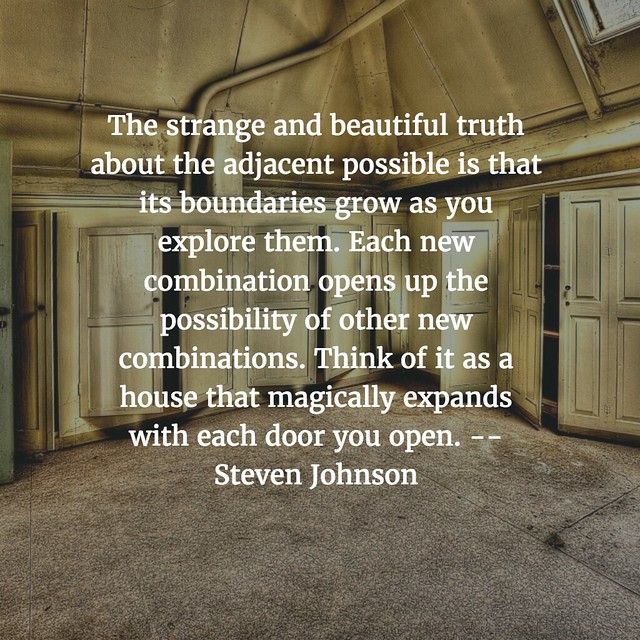 And I tangled with this tension of the adjacent possible the other day, when I wrote about how so many of them are afraid to take chances with their writing. I was frustrated by their confusion over an open-ended writing prompt, but hopeful in what happened. I believe in my heart that I can help my students discover what they can’t yet see. That belief of possibility is the ballast in this age of frustration with the tightening educational systems around us.

In the notion of the Adjacent Possible, it seems to me, the skill we need to nurture above all is Flexibility. We need to discover the wiggle room between one idea and the next, and then dive into that gap with possibilities — both that something will be unearthed and that our path may become a dead end (so, start over and try again). Being here is not enough. Being there is where we need to be.

A flexible view of the world — not just in writing but in everything — opens up the unknown, and in that unknown, we may find something new about ourselves, about others, about the world. I know this sounds like gobblygook but it rings important to me. It underlies why we write, and why we teach, and why we learn.

Peace (in the possibility),
Kevin