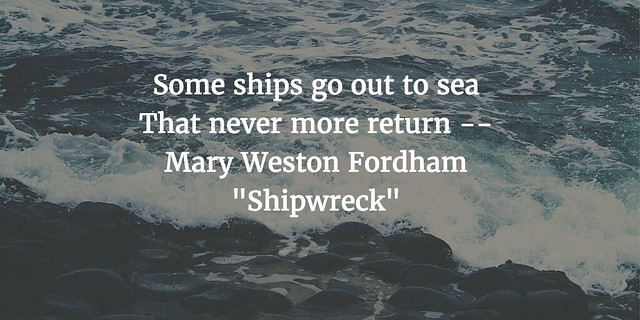 I did #WhitmanWednesday and #ThoreauThursday — two white guy poets of much acclaim — and I wanted to find a poem with the alliterative “F” for Friday that moved away from gender and race of the other two dudes.

So I wandered about, used a Search Engine as a compass for navigation, and sailed into Mary Weston Fordham.

Little is known about the life of poet Mary Weston Fordham. A free person of color from a relatively affluent family, she bravely ran her own school during the Civil War and was hired in 1865 as a teacher by the American Missionary Association. She taught during Reconstruction at the Saxon School in Charleston, South Carolina. Her poetry contains references to family and to the deaths of several children in infancy.

A single volume of her work, Magnolia Leaves (1897), containing 66 poems, was published by a South Carolina press with an introduction by Booker T. Washington. Her poems display an ease with meter and rhyme in lyrical explorations of historical, spiritual, and domestic themes.

I read and then tinkered around with her poems, which have a certain grace to them that I liked. I settled on “Shipwreck” for its theme and imagery of language, but also I was hooked on the last lines of the last stanza.

So, I took the last stanza of Fordham’s Shipwreck into the Visual Poetry and painted with her words for #FordhamFriday. Is that hashtag a thing? It is now.

I also took her poem, The Pen, and did some blackout work on it, recreating the words into something slightly new. 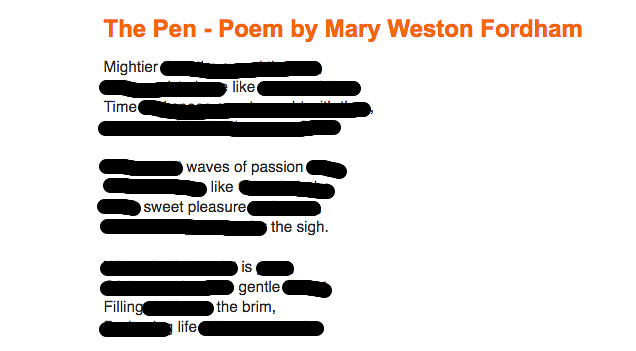 Want to play along? Here is a link to various Mary Weston Fordham poems.