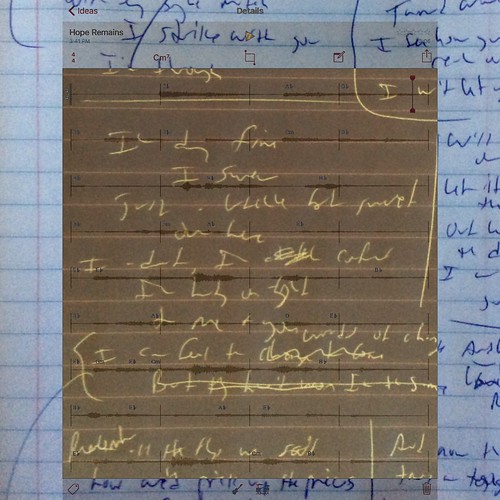 (Note: This post is a convergence of a couple of ideas, including DigiLitSunday, where the theme this week is “purpose.” I am sharing out and reflecting on that theme as I contemplate making music as a protest moment.)

I often respond to the world by turning to songwriting. Admittedly, my first attempts at writing songs always seem to slant negative, and then I often have to wrestle the words back towards something more positive and productive (well, sometimes a song just needs a downcast view of the world to be truthful and honest).

As I continue to go through my stages of What the @#&% over this election, I have been turning to music to vent. My purpose here, in both the writing and then the decisions I make with the production of my music, is to find a creative path into grieving and, then moving into action. It’s meaningful for me to write — it’s how I process — and my guitar has always been a companion during difficult times. I find comfort there.

This weekend, two songs emerged. One song is hopeful, if a bit mournful; and the other, a remix project, is angry and resentful.  My friend, Terry Elliott, wrote a post with poems and a hackable text that he called “Flip the Coin.” Each of these songs belongs on the same coin. How you feel in a given moment is how you might flip the coin.

The more optimistic song – called Hope Remains — is my attempt to remind myself, and maybe you, that we have each other in dark times, and that even in the darkness of the world, there is light. It can be hard to see. We sometimes need to search long and hard for it. We often stumble. But it is there. I wrote this one for me. I wrote it for my friends. I wrote it for you. Hope remains.

This song came together rather quickly. I knew I did not want to reference the election directly. That’s not what it was about. I started negative, and turned positive. In less than an hour, the lyrics and chord changes were done, and I had recorded the demo on my iPad. My original purpose in recording was to keep the song raw. No production – no reverb or compression or anything. The next day, though, I knew it needed something more, something lingering off the edges of the guitar and my singing. I then layered in the bass/cello on the bottom end and did a slight mix of the guitar/flute on the higher end.

The second song — called Welcome to the Boardroom — was my attempt to use Trump’s words against him, crafting a dangerous-sounding remix with his own voice as the underlying track. My purpose? Channel anger into song and use his own words against him. I put his voice through all sorts of effects, and gave the tune a driving beat, with an underlying distortion field of instruments. Listen in headphones to get the full effect. I also added in strange sounds, to aurally show how off-center and off-kilter I feel right about now. I felt a lot better afterwards. The cathartic effect, I guess.

Peace (we have each other),
Kevin