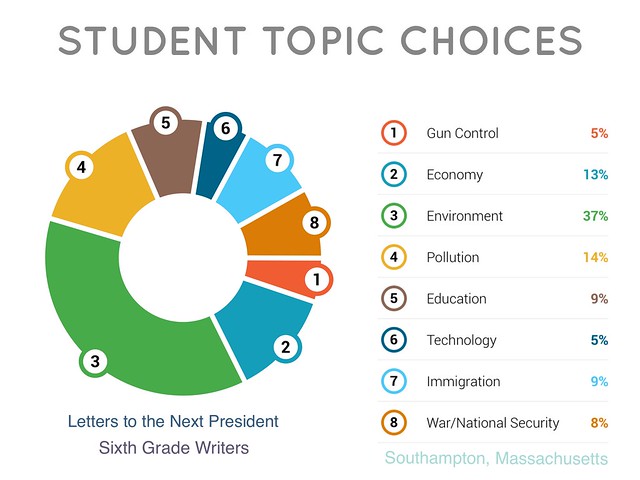 I wrote about this project, including the overarching plan and the collaboration between myself and my social studies colleage, in more detail over at Middleweb.

My sixth graders finished our version of their Letters to the Next President right on Election Day. The next day, we knew who had won. Yes, we will add President Trump to the salutation and ship the letters out nearer to Inauguration Day. I hope the transition team isn’t in such disarray that the letters get lost.

As I was going through and assessing the final version of the letters, I kept track of the topics they chose to research and write about. This was a combination research/civics/writing assignment, mirroring some of the amazing work done by older students at the Letters to the Next President site (nearly 12,000 letters from middle and high school students).

It is no surprise that the environment was a popular choice. Young writers often are worried about what is happening with Climate Change (yes, Mr. President, it is real and not a hoax) and the plight of animals in the changing world. I suppose “pollution” could have fallen under the “environment” umbrella, too, but there was enough distinction to warrant its own category for my purposes.

Again, you can read more about what we were up to at Middleweb.

Peace (in what they write),
Kevin