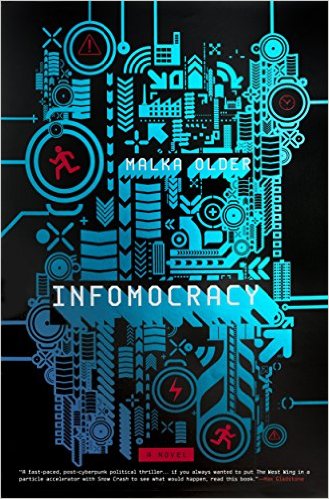 This book, despite a somewhat convoluted start, is nicely in tune with the current state of affairs: the entire crazy election process. Infomocracy by Malka Older is set in the future, and is in the William Gibson-ish science fiction realm of immersive technologies and how such innovation impacts our social fabric.

In Older’s fictional future, the world has shifted away from governments established by geographical borders, and instead, elections for political leaders are undertaken on the global scale, with “centenals” of people voting in small clusters for various government options. An organization called Information, politically neutral but extremely powerful, keeps all data flowing to people on a scale one can imagine if you believe in Moore’s Law.

The story comes down to one of political intrigue — which electoral group is trying to tip the scales, through violence and other means, in their favor to win what is known as the Supermajority, the designation of winning the most centenals, and therefore, playing a more prominent role in shaping the global landscape. We follow a handful of characters through the story as events unfold.

I nearly gave up on Infomocracy at the start because I had trouble keeping track of what was going on. Characters came and left, locations shifted, organizations (like Information and political ones like Heritage, Liberty, Policy1st, etc.) were mentioned. But a third into the novel, Older finds a groove, and the story starts to come together.

Good science fiction gives us another perspective from which to view the present, and Infomocracy does that. You notice how the narrowing of political views, away from the center, is creating pockets of like-minded voters with a shared agenda. When the middle ground decreases, voters’ views become more extreme. And given the shape of the geopolitical world, the removal of borders as defining political structures might be a possibility.

As an NPR reviewer noted,:

Older makes vital points about the disconnect between participatory government and representative government, not to mention the increasing corporate influence on public policy. During an election year as nail-biting as 2016, it couldn’t be more penetrating or relevant.