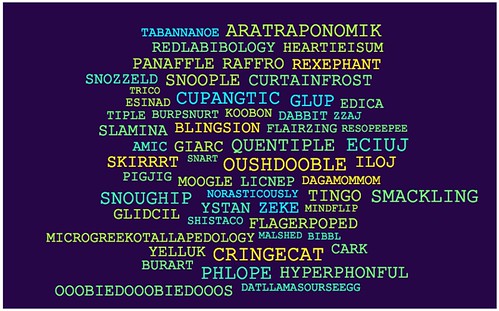 Now in our 12th year of collecting newly invented words (ranging alphabetically from Aamic to Zzaj) from sixth graders, our Crazy Collaborative Dictionary is pushing nearly 1,000 invented words. The invention of language is part of our lessons around the origins of words, and the roots of the English Language, and we have a blast with this word-invention activity.

But what amazes me is that this year’s class of word inventors weren’t even born when the first class of word inventors began making up words in 2005. Actually, we didn’t use a wiki until 2006, I think, but we used to publish the words as an in-house dictionary document. We started with an old wiki site called Seedwiki, and then moved to Wikispaces when Seedwiki kicked the bucket.

Once I had the first version of the wiki dictionary up, we shifted to the online dictionary concept (as well as lessons about this thing called the Internet and what in the world Wikis were). I’ve had them submit words all sorts of ways. This year, we set up a Google Form to collect words into a database.

A few years ago, we added podcasting to the activity, giving students a chance to record their word and definition. As I now pitch it to them, their voice will be forever (well, we’ll see about that, right? Forever is a long time in Internetland) linked to their word, in this moment in time. Five years, or ten years, from now, they should be able to “listen” to their sixth grade self, reading out their word and definition at the Crazy Collaborative Dictionary. (I am still connecting podcasts to this year’s collection of words)

I think that idea is pretty nifty, as is the concept that many of my students are now “collaborating” with older siblings, some of whom have graduated and are in college, or in jobs. But their words are there, in our dictionary, as are their siblings’ new words. As a father of three kids, I find that idea of cross-year collaboration pretty magical indeed.