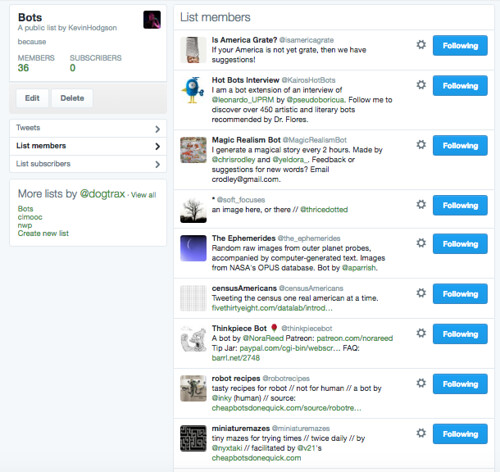 So, I am on another meander .. trying to parse out the possibilities of Twitter Bots as a means of digital writing. And wondering, is it? I don’t rightly know. Thus, the meander.

I’m on this line of inquiry thanks to the Networked Narratives crew, and one of the paths revealed during the recent “studio tour” with Leonardo Flores, whose work with generative Twitter Bots sparked some interesting annotation discussions.

Certainly, Twitter Bots — which are programmed to release writing or images or something from a data base at random or programmed times — are numerous (as I found when I started looking for them with new eyes) and funny and entertaining. Some bots mesh together ideas from other sites, creating a hybrid tweet. Others are original material, parsed together in odd ways. Some bots take on personalities from history, using archived texts as source material. Others are like programmed memes, making political fun of something through satire and sarcasm. Some are stories, unfolding in small bits over time.

Right now, I am following Mia Zamora and Alan Levine’s suggestion at Networked Narratives to “follow some bots” and see what happens over a few days time. I created a Twitter List of various bots that I have found (and feel free to follow the list if you want or you can ask Flores’ HotBots Bot to recommend Bots to follow based on your question or theme), and find myself dipping into the narrative stream now and then. It’s not a great strategy because the bot tweets are all mixed up, like a book whose pages have been put into disorder.

What I am wondering about in the larger picture, though, is this: can I make and launch my own Twitter Bot?

Yesterday, I started working on a Twitter Bot to send into the NetNarr twitter stream and  I think I can pull it off, but I have been struggling with what would I want that bot to say to the world? What database might it mine for words and ideas? What message? Is my act of making a bot share writing out to the world an act writing?

More to come …. tomorrow, I will write about my bot experiment.