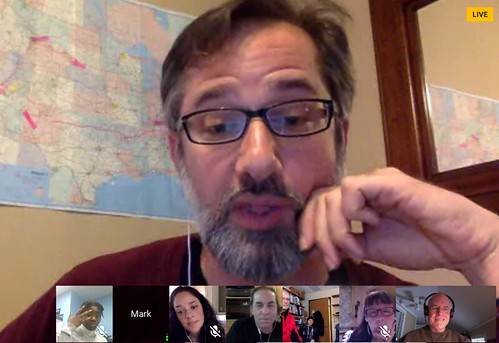 I was able to join a “studio visit” video hangout yesterday afternoon with the fine folks over at Networked Narratives and the strange (compliment!) minds behind what is known as Netprov. Essentially, Netprov taps into the possibilities of digital and social media spaces to create a sort of “networked improvisation.” 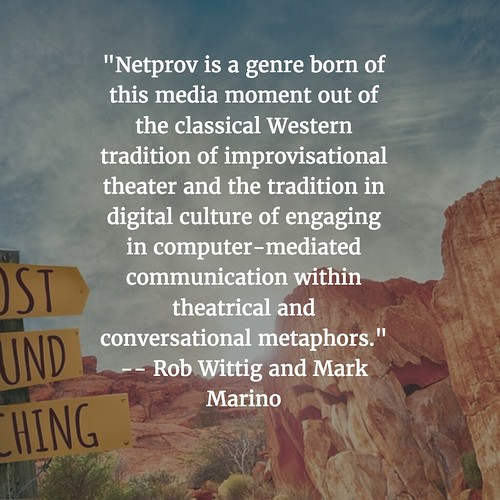 You can read more about the Netprov idea at the website, but these points stuck out at me, in reading and listening to the Rob Wittig and Mark Marino (I didn’t talk much in the Hangout because Mark and Rob had so much to say, and it seemed best to give the Kean graduate students time to ask questions):

They gave some examples from OccupyMLA to a sort of flash mob project on Twitter where a group people pretend to be watching a television show and live-tweeting it to a I Work for the Web fake campaign against the tech companies using users’ sharing to make profit. There are other, stranger, odder, cooler projects at their site, too (including a recent 5-gender dating Netprov project. Do I have that right? Really?)

Here’s what I am pondering now, asked by Mia Zamora in the visit: how does a Netprov parody and satire move beyond humor and into changing the real world for the better? (This is part of Mia’s continued reference to “civic imagination.”)

Rob and Mark, both college professors, say Netprov can and Netprov does, because the satire element forces the “actors” to be attuned to the why and what they are doing, and that often brings to the surface deeper cultural constructs. Rob also talked quite a bit about the “fake news” element of our media world, and how projects like Netprov can showcase the absurdity of the PR-spun alternative realities that politicians and media like to spin (as well as that lone person in their basement, pumping out fake news for clickbait profit).

Bowling Green Massacre, anyone? (Maybe the new administration is pulling off some epic, large-scale Netprov on us all? I shoulda asked that question in the hangout).

Terry Elliott has put the Hangout video into Vialogues for further study, and he invites you and us to listen and add comments. Oh, and he may have begun a little comment/margin/annotation Netprov there, too. All in the spirit! Get improvising!