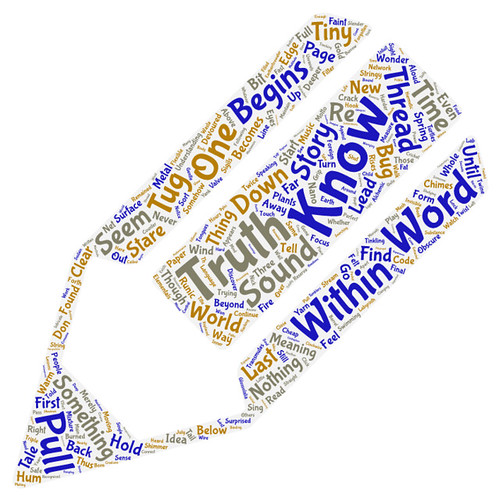 I was happy this week when a handful of folks in the Networked Narratives course took up my invitation to join me in writing a Folded Story. The idea is that you only see the fold above you as you write and then you pass it off to someone else (sort of like an Exquisite Corpse story).

The result, after 25 folds and about 10 different writers, is very strange, and I would argue it is an example of a networked narrative — a collaborative story written and told across time and space, with technology as the platform for telling the story. (The word cloud above is built with the words from the folded story).

Take a listen to the story. I narrated the whole thing, reading from start to finish all of our folds. I added a little music beneath it, just to keep the five minutes of story moving along. It was strange to read in one sitting, from start to finish.

You can also read the story here (or view it as a PDF):

So there you are, holding the thread and wondering whether to pull or not. The thread leads to something beyond your eyes. You stare at the thread. And then you pull. You feel it tug back three times and then a warm hum springs from the thread as it begins to sing. The words are faint at first, like the far away tinkling of cheap wind chimes, but the it becomes clear, ” This is not the beginning of the story. This is merely an obscure edge of the tale.” The wind chimes continue to shimmer. Out of the music, something appears. Paper, with burned edges and forgotten words. You read it aloud and the language is runic and foreign, full of sigils and elementals, EarthAirFireWater. The sounds at first are glossolalia, speaking in tongues. Meaning transmutes from lead to gold and a measure of understanding rises, “So say we thus: Within these words, within this fire, within this alchemic mixture, we discover the truth of the hermetic motto “As above, so below.” Turtles all the way down never swimming in the same time stream twice. Nothing to be had but to start pulling on the thread and following it into the labyrinth. It felt like you were tugging against something. So you pulled harder, knowing that the tail of the tale was still in play, even if it remained invisible beyond the sight line. One final tug of the thread and the world around you unravels. You watch as plants are replaced with twine, earth with yarn, and people with string; yet they all seem to maintain their form. The people notice you are not from their stringy world. They walk over to you and Touch your slender form. Your straight back and gentle hook is perfect for this stringy world which often becomes a net, a filter, a sort of flexible valve of ideas. You grip whatever you can hold on, searching for substance. There. You sense how this one story might spring forth others. You twist it counter-clockwise, surprised by I was surprised by a single CLICK! What?? This is a triple barrel lock, how could I not crack the code? All those lessons in safe cracking, gone to waste. All those hours studying codes, deciphering, hacking, tracking. But wait, I heard something… It was a tiny metal on metal sound–I recognized it right away–deep in the tumblers a nano cricket from the lab was worrying apart the intricate mechanism. Someone had planted the nano bug Its tiny clanging told me it was dangerously close to interfering with the network’s mainframe. One nick could shut down all central processing. Reserve power won’t be enough to sustain our work here. The bug has to be found and extracted. Fast. The bug started to burrow, deeper and deeper. It’s main food was bits and bytes, tasty morsels not found on the surface. It devoured the 1’s and 0’s trying to pass its fat body. Lost words for the child’s bedtime story. It feasted on and on until it disgorged what seemed to be a book, a bound contraption of words and magic. Its binding was wire mesh, nearly collapsible. You yank at the dangling thread. The whole thing expands into place. You stare and wonder at the title: An Alchemist’s Manifesto. Your mind races. Within seconds you are compelled to consume the words revealed to you. Page by page is devoured by your soul until you are, at last, filled with the knowledge of a thousand years. When the last word from the last page is written, then you will know. Until then, you must find new ways to intuit your inner life, making it connect with the randomness and fragmentary experience of this so called world. For what is the network effect, but a schizophrenia born of distraction. You know truth of course, you just need to pull the telescope from your pocket, reverse-engineer it into a microscope, and then find the focus. You know that. Find focus. You fiddle with the ****, turn the crank and another world arrives. Something is moving on the surface. Something quite extraordinary. Not one thing, but a multitude of beings, moving in coordinated fashion. They seem to be communicating with you, and somehow you are understanding their message of hums and whirs. Minute sounds that somehow converge into meaning. These creatures have something to tell me. Something important. Their meaning is fuzzy though. I get glimpses of an idea. Nothing totally clear. But, I think they’re trying to say truth exists though it can be hard to see. Though it may just be a tiny bit or a little it. Thing is you can view from so many different perspectives. Up top or down below. From the right or left with the light casting shadows just so. You never know but you have to go in, you have to answer their questions. You’re going to get up there on the witness stand and tell the truth as you know it. The whole truth, and nothing but the truth. The truth about what they did on the 4th of July. And if you don’t know the “they,” then you don’t know the truth. But you know there is time. There’s always time for the story to unfold or take a new turn, even a new beginning — like when you come into an improv performance and have to re-imagine what you missed. Every of us has our own beginning, and then we cross paths. Or not.