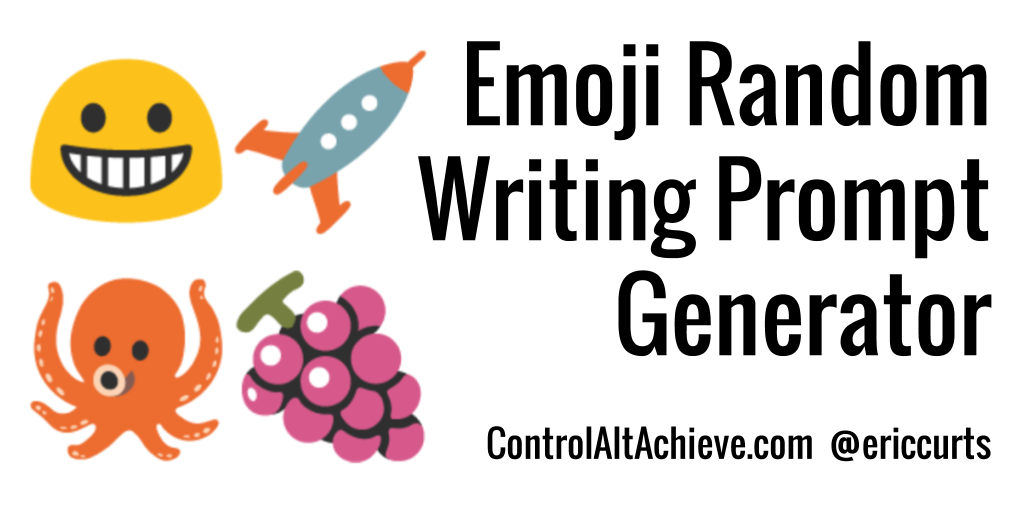 I was reading through the suggested activities for last week’s Networked Narratives course, and came across Alan Levine’s suggestion for doing a “Four Icon Story” that uses icons to tell a story with no words. I’ve done those before on Twitter via DS106. The visual aspect of writing (and trying to guess another’s four icon story) is interesting.

It reminded me of another post I had bookmarked, in which Eric Curts set up and shared out a Google Sheets Prompt Generator with emojis. It’s pretty nifty. I grabbed a copy, which Eric makes readily available, and began playing around with it.

One note: While Eric suggests that “control R” randomizes the emojis in the spreadsheet, my Mac wanted to do “command R” to get the randomizer working. So, you may need to tinker a bit.

I didn’t add any new emojis to Eric’s database, but it is certainly possible to do. Instead, I hit the “randomizer” button (Command R) and got my list of five emoji inspiration. How lucky is it that a saxophone was in the mix? Pretty cool!

And then, I wrote a story.

It was one of those blustery nights, the kind of night where every living thing in the jungle or the plains fell silent and tried to sleep, hoping for the sun in the morning. The Lion was hungry but not motivated to hunt. He knew there would be little out here, with the Wind blowing from the East. Hunting would likely be more trouble than it would be worth. Huddled in the leeward side of his rock, Lion pulled out his cell phone, and checked for service. Even with the Google Wireless Balloons in the air and Facebook towers dotting the plains, Internet service was spotty in these far reaches of the world. Lion imagined the Winds buffeting the Balloons, knocking over towers. Sure enough, there was no cell phone service on this night. Lion sighed. Hungry and disconnected from the world. He closed his eyes and sought out sleep. As he drifted off into dreams, he caught the faint sounds of music, as if someone were riffing off the melody of the Wind. The jazz floated above the plains, flatted fifths and augmented sevenths. Lion opened his eyes. Perhaps he might go hunting tonight, after all. The musician played on, unaware of the power of his song.

Wanna give it a try? You can either go to Eric’s post and grab your own database or you can view mine.