There’s a single line in the short Quidditch video that I shared with my sixth grade students yesterday that sparked an interesting reaction in all four classes that I teach. I was sharing a clip from the first Harry Potter movie, where Oliver Wood explains the game of Quidditch to a very young Harry.

The video, as well as one showing how they play Quidditch at the college level, is part of our work around our game of Quidditch, played for more than 12 years at my school and the 2017 Quidditch Championship is coming up in two weeks. (Video below is how we play our game)

The two videos set the stage for an activity in which students design and explain in writing how to play the play. It’s a lesson around different kinds of literacy — how a sports play diagram can be “read” and “written” — as well as reinforcing expository writing.

Anyway … in the movie video clip, Harry looks down at a box of Quidditch supplies.

“What are those?” Harry asks (at the 34 second mark, in case you are curious), pointing to a bludger bustling to burst out of the box.

I had heard this phrase before, but not recently, and I never followed up with any research as to where it had gone viral, and why. Of course, yesterday afternoon, intrigued, I did some research, going to Know Your Meme site (bookmark that site, teachers) to find out what is up with what are those … I knew it had to do with shoes and a sweeping hand movement towards the feet. I had seen students doing that, and crowd giggling.

According to Know Your Meme:

On October 2nd, 2011, Urban Dictionary[4] user JOHNxRYAN95 created an entry for “What Are Those?”, defining it as a question yelled at someone wearing unkempt or off-brand footwear. On June 14th, 2015, Instagram user Brandon Moore (a.k.a. Young Busco) uploaded a video in which he confronts a police officer by loudly asking “What are those?” before panning to his black shoes (shown below). Within three weeks, the video gained over 2,300 likes and 1,200 comments.

And the What Are Those? meme became a hit on Vine, I guess, and I suspect this is where my students found the meme.

It looks like the meme peaked about a year ago (according to Google Trends graph) but I guess some viral sayings just stick with you. 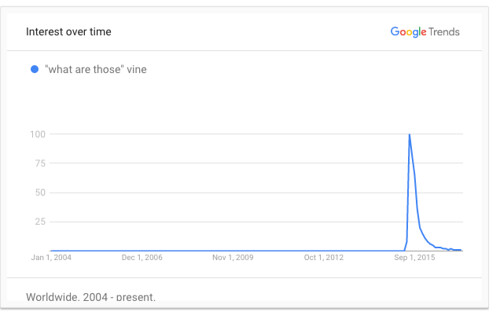 Peace (that’s what they are),
Kevin