This one will be a bit difficult to explain to an outside audience, but as part of the Networked Narratives course (I am an open participant, which means I can come and go as I choose – the course is about digital storytelling – there are folks in a real Graduate Level course at Kean University, too), there has been hints of secret codes, hidden within video frames and inside course messages. For a long time, weeks actually, I figured, I’ll let someone else crack the secret codes. 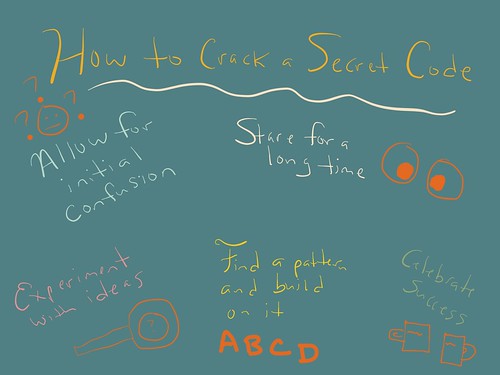 And then, this sort of gently taunting tweet came along the other day from two mysterious recurring Twittery characters (who are part of the larger story of the course being “hacked” by outsiders), and I decided, OK, time to get cracking.

Hmmm @MProphetissima We thought #netnarr people were clever. None has broken code? https://t.co/gbvJCX8hra We are depending on them….

I had to stop and start the online video Youtube conversation with instructors Mia Zamora and Alan Levine a number of times, and use a screenshot grab to get the secret code embedded in the video. I stared at it for a long time, and then began to see a pattern, and worked from there.

This was the code:

The result? Well, I made this audio version of the message (which, again, will sound strange out of context of the NetNarr community, but which indicates the start of a push towards the second half of the course, which I think is about world-building and civic imagination.)

I tackled this simple code by hand, determining it was based on an alphabetic shift of letters, but later realized there are plenty of online sites that will do it for you, too. Still, I was glad my initial foray was on paper. There was a certain level of satisfaction that I did not require technology to crack the code.

Now, there are all sorts of other strange codes coming into the NetNarr stream, too, with numbers and letters and I have no idea how to even begin to figure those out … any ideas?

Peace (coded for the world),
Kevin