Inspired by my friend, Sheri, and her Poem for Three Voices about a young writer that she, and I and Melvina recorded and shared last week, I wondered if I could expand that notion a bit and write a Poem for Five Voices, and get four other people from different geographic locations to use Soundtrap to record.

I did, and we did, and it sounds like this:

My aim in writing the poem was to offer up a critique of the media/news landscape, and try to discern some central point about the elusive nature of Truth. I am a former journalist, a writer of news, and an avid reader of news now. I am both disheartened by the declining State of Media, and heartened (in a very strange way) that Trump’s imperial presidency and Bannon-led attacks on Media have actually galvanized and strengthened the major news operations, and attracted readers.

The use of multiple voices in the poem is designed to show all of us, together, sorting out what is real and what is not, and what is spin and what is not, and calling out media and political leaders to account for the information flow. Yes, we all have a responsibility. That doesn’t mean we can’t do this together, and find a way to make the world a better place for all. THAT is the truth, from my perspective.

You can view my poem here and feel free to remix it, use it or ignore it. This screenshot is the first of two pages. 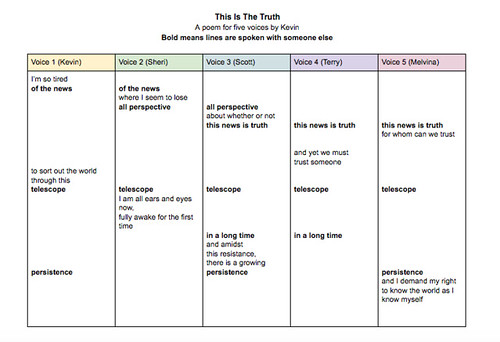 Process Notes: We used the online site, Soundtrap, as a way to coordinate our voices. It would have been a whole long easier if we had been in the same room, same space, with poem in front of us. That wasn’t physically possible.

So, what you hear is some vocal dissonance, as our phrasing weaves in and out of each other. Recording a poem like this is complicated, we quickly found, and I edited audio tracks to fit as best as I could. We began with Melvina doing a master track, which we then worked off individually, and then I edited to make it sound like a whole.

Notice the different sounds of voices. Quality of microphones becomes a potentially technical hurdle, and I used compression and other effects to try to align them as best as I could. In the end, maybe that flattening didn’t matter. Maybe, in fact, the different sound qualities are part of the composition — showing different views through sound. I might be stretching here.

I want to warmly thank Sheri, Scott, Melvina and Terry for patiently following me on this collaborative adventure. We organized ourselves on Twitter, and then had our voices meet in Soundtrap. It was a grand adventure.