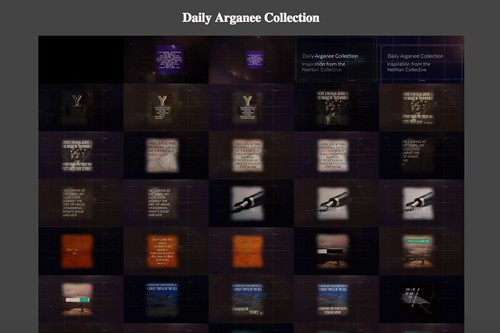 I spent a good part of the first 100 days of the Networked Narratives adventure trying to do the Daily Arganee prompt just about every day, both in my guise as The Internet Kid and Horse with no Name, and as myself, using an app called Legend to create short bursts of creativity. I stopped at the 100th prompt but may soon jump back on board. (I hit 98 with the Kid/Horse combo but only 79 as myself, according to the Daily Araganee leaderboard).

I stopped to take a breather when it started to feel like a chore rather than like fun. In addition, the NetNarr experience has shifted into a Mirror World element, and that has included new personas (I have another alternative fictional character in play) and different activities. I’ve been concentrating on that NetNarr aspect for now.

Using the Legend app gave me both some freedom (merging art with words and movement) and structure (limited text/characters) and I worked hard to try to see each prompt from a different angle, to come at it from the slanted view. I can’t quite explain what I mean, except that I never tried to directly address the prompt. Instead, I tried to come at it from an unexpected angle. Obviously, some days were more effective than others.

I have now gathered up many of the prompts that I responded to (although you can find them one at a time at the Daily Arganee site, too) , and put them into Animoto as a curated video space. I like the effect of them all together.