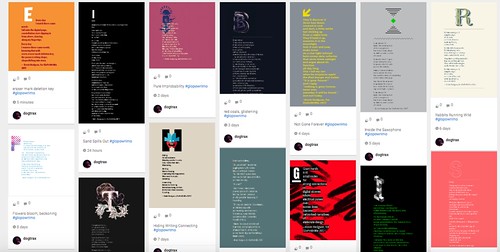 It may be the last gasp of April, and therefore the end of Poetry Month, but I’ll be writing poems long after April has waved farewell to us all. I hope you, too, won’t be shackled by the rather arbitrary calendar. Still, it’s nice to have a continued and vibrant focus on poetry.

You’re here at the fourth week of writing. I’ve been composing my poems over at Notegraphy, and my gallery is here. I’ve enjoyed using Notegraphy instead of my blog because it allowed me to keep the poetry writing separate from other writing, at least until I curate the poems, like now. There’s also the interesting design element of Notegraphy.

It hasn’t felt much of a burden to write 30 poems, one each day, but maybe that is because of my system of writing early in the day, fueled by morning coffee, and just going with the flow of whatever the prompt has sparked. I always say this when I do a bunch of writing, but I hope to someday go back and edit/revise the poems and pull them together in a more cohesive fashion. Someday. Maybe.

Here are some opening lines from this past week’s writing, with links to the full poem, if you are interested, from the week behind us.

I can always fit
inside the twisting bell
of the saxophone,
the tenor’s long shape
as dark as some cavern
of sound.

Rabbits running wild
along the edges
of the book,
a sinkhole of words
opens up, forcing
a closer look.

They’ll discover it
three feet down,
covered in rock
and dust, a little white
tail sticking up
from a rabbit hole.

Bitter ashes;
That’s what we remember.
Bitter ashes on the tongue.
When we were young,
building fires
without abandon ..

It’s coffee, not tea,
that fuels me;
Night’s disappeared.
Now, I can hear
the sounds of you

Sand spills out,
time running through
my fingers, collecting
at my feet.

Every day
I watch these same words
fall onto the digital page,
constellation stars dipping in
from above, dancing
along my fingertips.

I hope you wrote, and that you write, too.