Ten years is a long time to be doing anything.

I spent ten years, almost exactly, working as a newspaper journalist, covering politics, meetings, crime and education. Ten years seemed like forever when I finally left to become certified as a teacher (and take on role of caregiver with our boys at home in my stay-at-home dad chapter of life).

I am fifteen years into teaching now. That’s ten plus five. I remember the ten year mark as being important because it meant I had lasted and lasted longer than my previous profession as journalist. It was around then that I realized that, yes, I was a teacher.

My wife and I have been married nearly 2o years. Ten plus ten, with three kids. Those years have flown by. We still can’t believe it.

And it has been ten years in Slice of Life, too, as every March rolls around with the call from Stacey (and once, it was Ruth, too) and the team of too-many-to-count accomplices over at Two Writing Teachers. It’s a lot to ask of us, to write every single day about small moments that have larger implications. Yet so many did it — this March, the writers numbered in the hundreds at the start (more than 350 writers on the very first day) and still more than 240 at the end with the last posting on March 31.

Think on that. Hundreds of teachers who now see themselves as writers in digital spaces. And then there were the teachers who had their students writing Slices of Life, too. I hope they found an audience among other slicing students.

The mixed blessings to that kind of growth of anything online is obvious, too. There were so many people in the mix that I found commenting and connecting to be more like leaves blowing in the storm, at times. There was a less a sense of community. A bit disorienting. This is no fault of the organizers at Two Writing Teachers. It’s a natural part of online connections and a reminder of why many MOOCS (Massive Open Online Classes) falter over the long haul. The larger the crowd, the more the noise, and the less the signal. And when that happens, participants can feel as if their voice is lost in the wind. They drop out.

This chart shows some documentation of MOOCS, but it also translates well into how many online spaces flow: 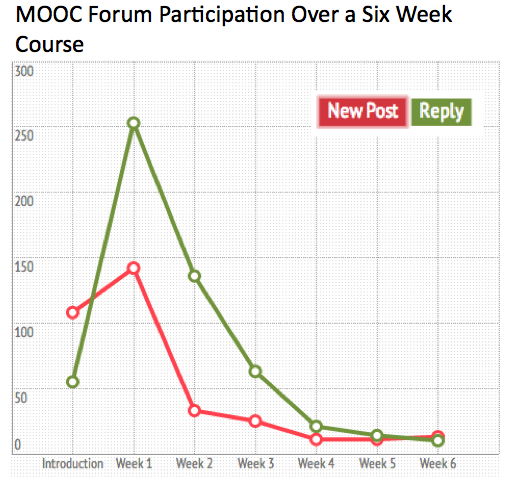 The folks at Two Writing Teachers try to counter this by incorporating the “comment on other blogs” into their messaging on a regular basis. I continue to find that commenting as the first step into online conversation to be inadequate. I can’t easily trace my steps back to blogs where I have been, and then I feel guilty about not responding to every blogger who comments at my blog. And I wonder: how can I make a comment worth something and not just a few words on the bottom of a post? That would be a full-time job.

Meanwhile, you know, Life goes on. (And hopefully, it also provides more moments to write about later)

I did try to find new blogs to comment on this year, but I often found myself visiting the “early morning posting” crew, of which I am a member, and following bloggers I have come to know, either from the past or from the early days of this year.

I often felt a little lazy about doing that — of not reaching out more to. new folks as much as I could have. And I wondered if there were bloggers posting in the middle of the day who never got any comments on their posts because so many of us were either early morning-ers or late nighters. Those are the kinds of things that worry me, sometimes, and I am not even an organizer of Slice of Life. Sheesh. I guess when I participate in something, I feel a sense of responsibility.

March 2017 is now over, but the Slice of Life continues through the year on Tuesdays. The once-a-week gives a little breathing room, and you can write or not, read or not, comment or not. With no pressure, and only an invite to participate, the choice is yours.

I hope I see you there.

Peace (slicing it and sharing it),
Kevin