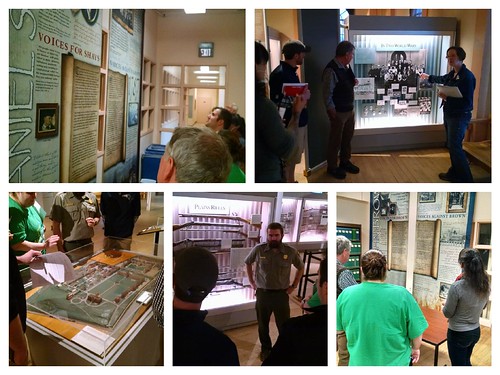 I am helping to co-facilitate a new project that connects middle school educators and students with the Springfield Armory, our local National Park historic site through writing and inquiry and service learning projects.

Yesterday, at our first meeting, we began our work on the project, as our group of teachers from an urban magnet school took a tour of the Armory itself and learned of its rich historical resources, took part in a workshop on Authentic Writing and Performance Tasks, and began initial planning for a free summer camp we are offering at the end of June for city students at the Armory.

I can’t say enough about the educators who have agreed to be part of our project, called Minds Made for Stories (influenced by the work and book of the same name by Thomas Newkirk, who argues that narrative is the underlying nature of all writing that we do). They were inquisitive, passionate and ready to dive into the work ahead of us.

The overall theme of our project is Social Justice, and the thread that will tie our work and the development of the camp is “immigration,” as the current climate around immigration is a central focus in the lives of many of the students at the school where our teachers teach. This became clear as we worked through a variety of topics, as teachers talked about the all-consuming worries and anger about the current immigration policies and politics of the national stage.

We’ll be looking at immigration, and racism and other related topics, through the lens of the Springfield Armory and its workforce, and its work as munitions center for the country for much of the 20th Century. We’ll have guest speakers to talk about oral history, and have student at camp design some sort of service learning project that can go back to their school in the fall.