This blurb is from the local newspaper, The Daily Hampshire Gazette:

The first parade was held in Northampton in 1868, just after the Civil War.

“The ceremony of decorating the graves of deceased soldiers in our cemetery was appropriately observed,” the Gazette reported in 1868. “The weather was bad, rain falling during the forenoon and at the hour of assembly but not-withstanding, a large number of people were on hand to participate in the exercises.”

A century and a half later, the community will continue the tradition. 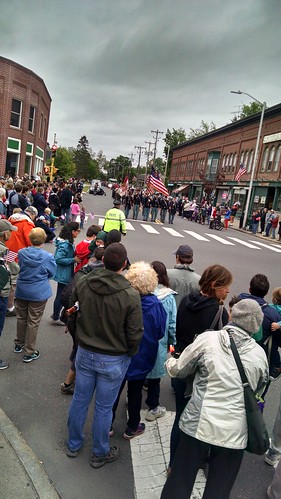 Rainy skies kept the turnout relatively low yesterday, but we were there, as my son agreed to march with the Little Leaguers, even though he was one of the oldest (and tallest — that’s him in second row behind the sign) in the marching unit. He was reminiscing before the parade about the excitement he had when he first marched, about seven years ago. I suspect this might be one of his last years as a marcher, but not as spectator. 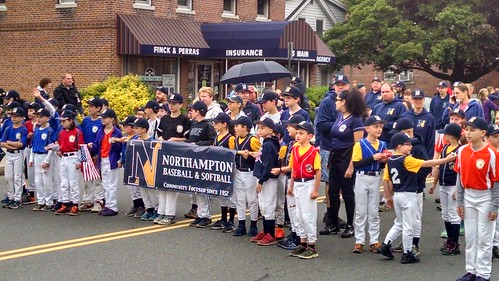 Next year, 150. We’ll be there, clapping and cheering on the veterans and local marching band, and baseball kids, dancing kids, and more as they walk the streets of our small city blocks. We’ll remember those who have fallen in battle, and the connection to our community.