We sat in a small circle, three middle school boys and I, and talked through the rules. We were playing UNO on the first day of a summer camp I am helping to facilitate that connects writing and local history, and is a complex partnership between our Western Massachusetts Writing Project, an urban school with a social justice identity, the Springfield Armory, Veterans Education Project and Mass Humanities (which is funding the project).

I won’t go into all of the hurdles we have faced to make this camp actually happen. It’s happening. The kids from this school in the heart of Springfield were engaged and enjoying themselves. That’s enough to cite success.

But this after-lunch scene, with me playing UNO on the grass fields outside the Springfield Armory (and much of the grounds is now part of a technical college) sticks with me. It was so much fun, getting to know these three middle school boys as we navigated the rules, helped each other out, and just chatted away. 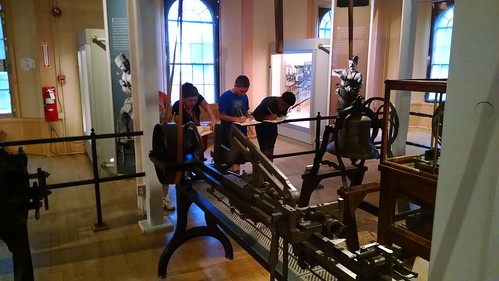 Day Two starts in a few hours, and we have some cool activities planned — including an re-enactment actress who will give a dynamic presentation about women’s roles in the Armory during World War II — but I already know that one of the boys from the UNO game is determined to get a game of Apples to Apples going at recess today.