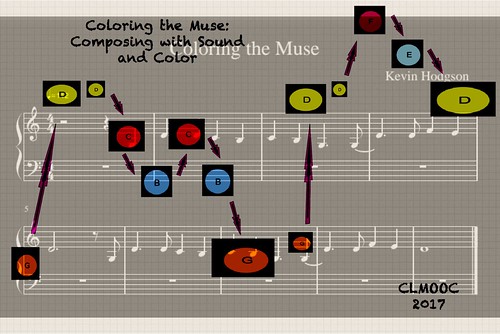 In an email this week to Karon, Wendy and Ron, I noted that if this project I am describing here were all that came out of CLMOOC (Connected Learning MOOC) for me this summer, I would be quite content and satisfied. (Happily, there is much much more coming out of CLMOOC this summer). These three friends of mine all collaborated with me on a musical piece called Coloring the Muse that arose from the theme of art and coloring during the first Make Cycle, and then was transformed by our collaboration.

Let me explain .. but first, let me share the project itself ..

This project all began with our explorations of color in the first Make Cycle of CLMOOC. Much of that Make Cycle centered on the Collaborative Coloring Book project. At one point, though, Karon and others, in our Google Community, shared some links that connected the color spectrum to the music spectrum, linking how we hear sounds to how we perceive colors. I found that fascinating, and began to think about how one might “paint” with colors to make music.

I tinkered a little bit with a melody line, based on some color patterns, and shared it back. Karon, whose CLMOOC connection I appreciate each summer, took that melody and used a music compositional software program called Noteflight to begin the process of composing a song, with harmonies and variations. The software program does kick out an audio file, so we could hear the parts in progress.

But I wondered if we might take the song into Soundtrap for some live collaborative recording. So I did, and I invited Karon and Ron (whose many talents include art and music via keyboards and programming) and Wendy (also a talented artist and musician). Soundtrap allows for distant, and global, collaboration on musical tracks. Ron is from the Netherlands, Wendy is from Australia and Karon and I are in the US. Perfect. 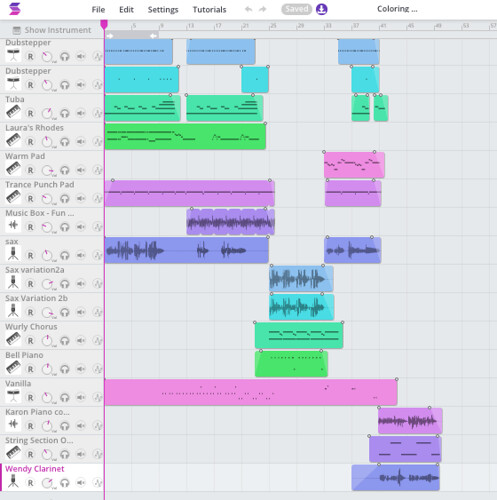 As I began laying the first tracks, though, I kept the main melody line and some of the harmony ideas, but didn’t exactly follow Karon’s compositional ideas. Instead, we played with the song, using Karon’s ideas of variations as a springboard, weaving percussion and counter-melodies throughout. I added some alto sax after Karon wrote out the parts, riffing off the main line at times, and using some sound effects to create a layered variation. There’s even a bit of planned dissonance, creating tension. The ending of the song is a piano part that Karon composed, but the track is actually the compositional software’s version of the piano, with Wendy’s clarinet as melodic accompaniment.

I also knew that I wanted to use the song as the soundtrack to a video with color, and I spent some time trying to find a way to do that. I could have done something more original myself, with iMovie or something, but I had this vision for an idea that I could not create myself, with colors dancing in time to the music. I ended up at a site called RenderForest, which has some neat templates but it is rather expensive to use if you want a video without their intrusive watermarks. I did find a coupon to discount it, and plunged to pay, since I really felt driven to have this color visualization be the visual for the music inspired by color spectrums.

That’s not all … Wendy has now taken the song, pushed it through another remix program, and then created her own video version of the song and its colors. And Ron wrote about an earlier project of his, connecting music to color, and shapes.

This is what CLMOOC is all about — emergent ideas that become the source for collaboration and creativity, following our passions through connections.