I was on family vacation last week and as usual, I brought a stack of books with me for the beach and beyond. Mostly graphic novels (with Magpie Murders thrown in .. that’s a good one for the summer). Here are some quick reviews of four graphic novels:

I believe this is the fourth installment of this series by the talented Gene Luen Yang (and Mike Holmes) in which the graphic story format weaves computer programming skills into the storyline. Sometimes, that works, particularly when the story pauses and the reader is invited to consider a solution to a puzzle or quandry. Other times, it feels a bit intrusive to the story. But I am enjoying this series very much, as the kids continue to figure out a mystery, with new twists and layers added each time. The Secret Coders series is a fun read, aimed at upper elementary and middle school readers.

Castle in the Stars: The Space Race of 1869 (Book One)
by Alex Alice

This oversized book by Alex Alice is a sort of steampunk-infused tale of a young hero, Seraphin, whose engineer father is designing a ship that is powered by the elusive “aether” — an invisible but powerful atmospheric force that most don’t believe exist. There is palace intrigue, interesting characters, and plenty of danger here. While the plot echoes other stories (a mother goes missing, leaving a note for her son that sparks the adventure forward), the art is fluid and in motion. This is the first book of a series, apparently. It is a good one for middle school and high school students (although there is nothing inappropriate, and could easily hit the imagination of upper elementary readers)

Mighty Jack and the Goblin King
by Ben Hatke

I am a huge fan of Ben Hatke, and this second book in his Jack series has only deepened my appreciation for his talents as a storyteller and artists. Hatke has taken the Jack and the Beanstalk into strange, new territory here, and I love that the story splinters and then comes back together in a way you might not suspect. He always has strong female characters, too. Mighty Jack’s story is not over, and the end of the novel brings another movie-like twist, reminding my son and I of another Hatke character that drew us into his world many years ago: Zita the Spacegirl (another series you should read). The Jack series is a solid read for elementary students, but middle school readers would probably enjoy it, too. 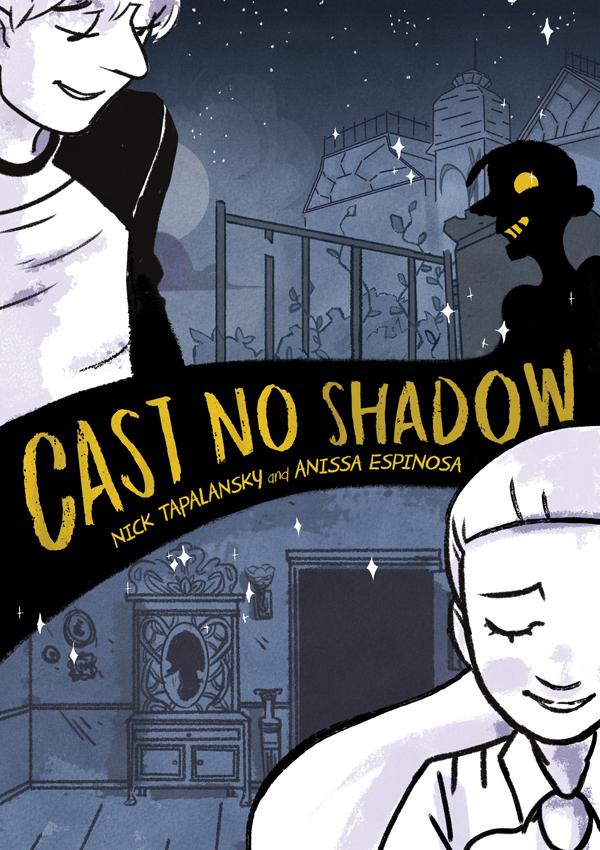 Cast No Shadow
By Nick Tapalansky and Anissa Espinosa

I didn’t quite know what to expect from this one. It’s set as a sort of teenage love story, but with one of the two teenagers with a crush being a ghost stuck inside a house. The story gets more complex as it moves along, though, with hints early when we learn that the main character was born without a shadow (hints of Peter Pan?). The more I read further, the more I liked this novel by Nick Tapalansky and Anissa Espinosa, as they weave humor and insight, and the strange entwining of history and the present, into a heart-warming tale of small-town goings-on. This book is aimed at high school, but middle school readers might find it interesting. There is nothing inappropriate for younger readers, however.

What have you been reading?

Peace (in pics and words),
Kevin