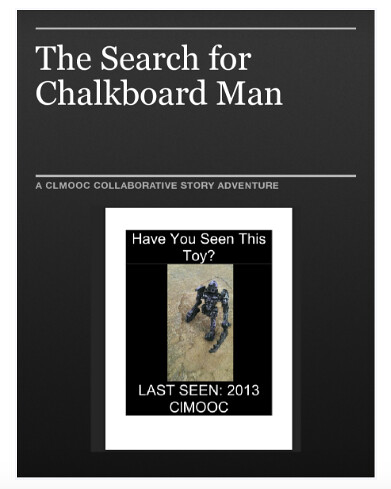 A collaborative writing project that began in early summer in the Connected Learning MOOC has just wrapped up, and it was a blast, as a bunch of us engaged in some story writing with an invented character Miss Direction. It all began when our CLMOOC friend, Jeannie, remembered a hacked toy from the first year of CLMOOC that she had mailed around to folks for Vine stories.

Chalkboard Man disappeared that year, never to be seen again.

This year, we used another invented character from Jeannie’s imagination — Miss Direction — and made her out of paper. More than a 16 people from all over the globe downloaded a copy of Miss Direction, took her on an adventure to find Chalkboard Man, and then wrote about it (and documented with images or video) on a shared but secret Padlet space.

I created this as a teaser for the book release:

I have been wanting to do more with iBooks Author, the app on my Mac for publishing, so I took all of the text from the collaboration and created this downloadable book. Each chapter is another writer who hosted Miss Direction. As a bonus, each writer, after finishing their section, was encouraged to mail their version of Miss Direction to the next writer, so she flew through the mail quite a bit in different disguises.

Read and Download The Adventures of Miss Direction: Searching for Chalkboard Man via Scribd.

Or you can read it here, via this embed.

The Adventures of Miss Direction: Searching for Chalkboard Man by KevinHodgson on Scribd

I am also going to work through how to publish this as an eBook in iTunes as a free story. More later when I figure that out.

I love this kind of collaboration that unfolds over time. It’s a bit tricky to do the logistics on this kind of project, particularly where you want the story to remain hidden until the end. 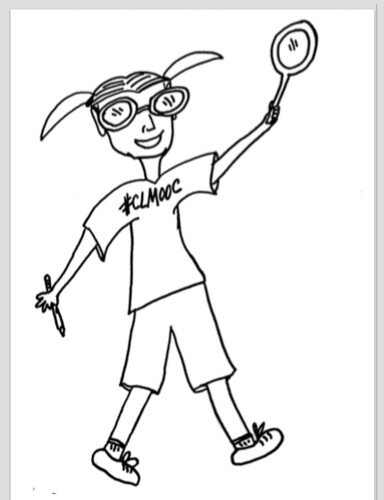 Feel free to download your own version of Miss Direction. Color her and send her off on an adventure. Be sure to share, too.

Peace (there are clues),
Kevin