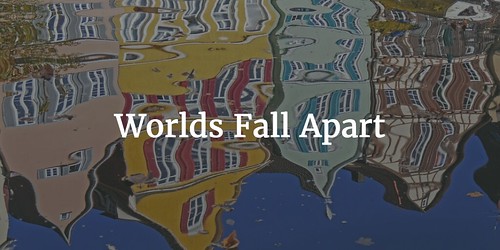 I was following a number of threaded discussions over the weekend on Twitter, about Twitter. Concerns about its negative elements (trolls, privacy, etc.) versus its positive elements (connections, discussions, etc.) continue to play out in all sorts of ways.

My friend, Sherri S., wrote a blog post response to George S.’s observations that criticized Twitter as a narrowing space of echo bubbles we create for ourselves (I’m summarizing my reading of his points), and I found her deep dive interesting. So I took her words for a walk in a remix version (which sparked its own discussion on Saturday about the value and rationale of remix).

And that conversations lingered in my mind, as I sat down to do some songwriting yesterday. I can hear it in the lyrics of this new song — Worlds Fall Apart — about the idea of starting over, and building something new.

The song is also on Soundcloud.

Maybe I had Mastodon, and its federated ideas of freedom from corporate control of social media spaces, on my mind as I was writing. Or maybe it was the watching of the first Mad Max with my son the other night.

This is the second Making Music post this week. I have at least one more coming. I’m suddenly finding myself back to some songwriting and thinking about music making, at least for a bit.