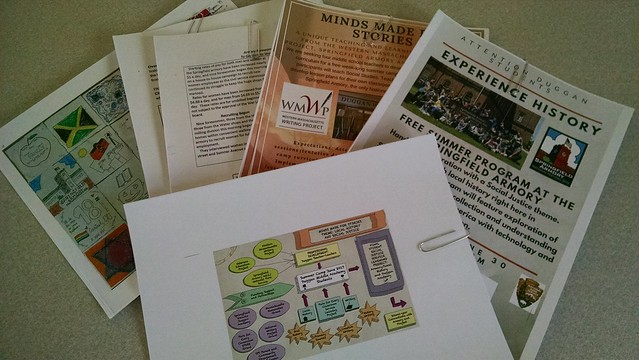 It’s not easy to write the title of this post nor its contents, even while staying positive in spirit and tone.

Tonight, after a day of teaching, my wife and I head to St. Louis, Missouri, for what may well become the last Annual Meeting of the National Writing Project. The federal education department shut off the last bit of support for NWP’s work with teachers/professional development. While NWP will surely survive in a diminished form with other partnerships and initiatives, the lack of support by the Trump Administration (which had already started to diminish in the Obama Administration, too) will pose difficulties for many of the NWP sites around the country, I am sure.

The writing, so to speak, has been on the wall for years, even with the documented success of the writing project’s impact on classrooms and schools (see this report). A recent newsletter update from NWP indicates this kind of event may now fade away in its current form, which is the coming together of NWP educators to learn together, to share together, to connect together. I think I may have only missed one or two Annual Meetings since I started teaching more than 16 years ago. I suspect it is expensive to host these gatherings, and when looking at the bottom line, it makes sense that this would be something to cut (or merged into NCTE as a strand, perhaps?)

At a recent leadership retreat for our Western Massachusetts Writing Project, this topic of reduced and loss of NWP funding was front and center as we talked and set forth plans for the coming year. We know we can’t expect some rich benefactor to step in (but, heck, we’re open and ready for it to happen), so our site work around professional development and offerings for teachers will have to find some balance of bringing in funds for that work to pay for other projects. The fate of our core Summer Institute is OK for the immediate future, but unsteady in the years ahead.

In St. Louis this week, I am part of a presentation with the National Park Service that looks at how we can use National Parks and Historic Sites for engagement of teachers and students. Our work here with the Springfield Armory site has been fruitful for teachers and young people, particularly during our summer camp program. That project, which I facilitate, is funded through the Mass Humanities organization, for which we are thankful, and for which we know might be model of partnership support going forward. Still, small NWP grants have helped pave the way for this work in the years past.

So, yes, we will celebrate the National Writing Project at a the St. Louis gathering of the Tribe that has always energized us (and not far away, the National Council of Teachers of English meeting will be starting its meeting, too … another Tribe), and we’ll worry about the future of NWP, too. I consider the National Writing Project and the Western Massachusetts Writing Project my professional “home” and the prospect of such uncertainty is unsettling. It also makes me wonder which charter school, private venture, religious school is getting Education Secretary Betsy DeVos’ attention instead of the NWP.