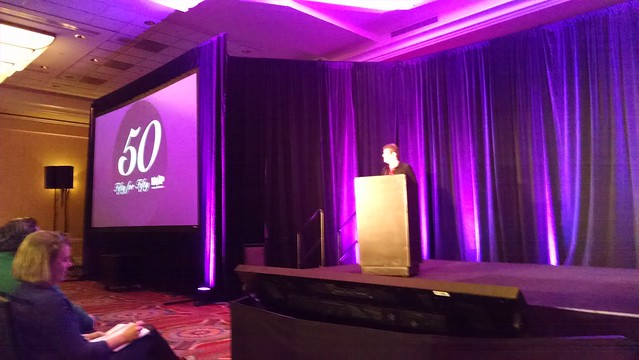 She made the best of the situation. No surprise there. National Writing Project Executive Director Elyse Eidman-Aadahl worked the large crowd of hundreds of NWP educators and leaders at our annual meeting yesterday here in St. Louis, Missouri, by keeping to the script of a traditional Plenary Address — a celebration of the work and spirit of the 180 writing projects sites across the country.

Just as we have done every other year (see annual report).

We heard stories from the stage about the impact of the writing project. We were mesmerized by stories of three outstanding educators who took part in the Holocaust Educator Network, and then returned to their schools to engage their students in powerful discussions of social justice and equity. One of those teachers dazzled the audience with a spoken poem addressed to a parent concerned about the teaching social justice in schools.

All this came as inspiration and celebration, even as Eidman-Aadahl  acknowledged that the federal SEED funds that have supported the work of the writing project has disappeared, and the NWP itself is shrinking. The main office is dwindling in staff, whom we gave a rousing standing round of applause for, to show our collective appreciation for the work they have done and do behind the scenes on many projects.

NWP won’t be disappearing, but it will be smaller than it probably ever was since it was first founded on the campus of Berkley in the 1970s, and began to spread out, thanks to the energy and vision of founder Jim Gray. Our Western Massachusetts Writing Project site is nearly 25 years old. 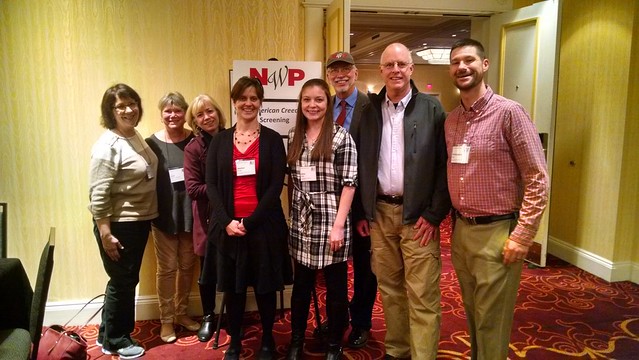 What happens next is not exactly known, but it follows the trajectory of the wave of Republicanism in this country: cut the top level of everything (even if it causes disruption and chaos) and let the local community determine what survives and what doesn’t. (I don’t agree with that political rhetoric but it’s hard to ignore that’s what’s happening.)

“The future of your (writing project) site is in your hands. The future of our network is in your hands,” Eidman-Aadahl said, and I thought of the guiding philosophy of “teachers teaching teachers” as what might continue to guide us forward. “Walk towards your purpose. We will get through.”

And then she left us with a challenge. The National Writing Project is celebrating its 44th year this year. She wants us to be around to celebrate its 50th year in six years from now (maybe, this writer says to himself, a new president and administration will realize the impact of NWP on the quality of education in this country. Hmmm.)

So, she said, what about a “50 for 50” campaign of some sort. Local sites can determine what that might mean. Maybe it’s 50 new leaders at the site in six years. Maybe 50 new writing resources developed. Maybe 50 classrooms reached. Maybe 50 testimonials to the reach of the writing project.