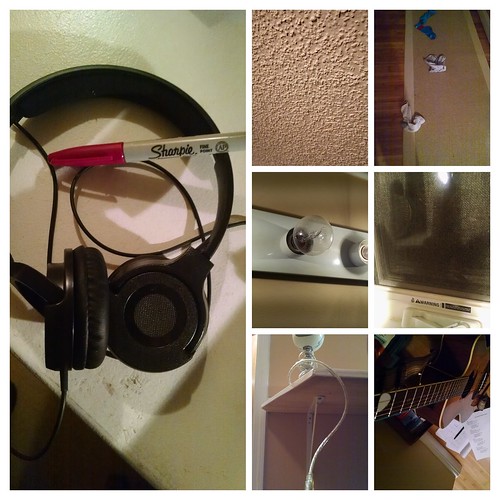 The cool thing about taking photos is that you have to look at the world a bit different. It’s not just the device you see through, it’s the way your eye sees the world through the lens that sees the world.

Yesterday, before the Networked Narratives Twitter Chat (which I forgot about until it had started), there was a NetNarr Safari activity, which involved taking seven photos over 15 minutes with different visual prompts coming in over Twitter.

I arrived when it was over (or, as we say in CLMOOC, I was right on time), but then decided, what the heck … and so I did it on my own, scrolling back through the NetNarr Twitter feed.

I didn’t leave the room I was in, so my safari was not all that wild. Microphones instead of monkeys. Socks instead of snakes. But I liked how the physical confines of my space forced me to consider the visual prompt (like, two objects that don’t match or one color or some kind of tracks), then look quickly, make a decision, snap the shot, tweet the results and move on.

The downside is it felt one-sided with no interaction with other NetNarr folks (and except for Wendy, whose safari I see this morning, I haven’t seen anyone else’s), since I was late and the Twitter Chat had already started (I was late to that, too, but enjoyed the topic of Digital Art.)