Most mornings, we have a Circle of Power and Respect in our sixth grade classroom. It’s a version of Morning Meeting, aimed more for older students. At this point in the year, I have my students lead all aspects of our morning.

One element of Circle of Power is the initial greeting, and there are all sorts of variations of activities that one could do, and I encourage my students to invent their own way of saying hello to every students in the classroom community, and making sure everyone feels welcome into the day.

The other day, the student leader — a bit of a goofball who straddles the line between serious and goofy on a regular basis — told us that the way we would greet each other is with the phrase “Do you know the way?”

Or, as he pronounced it with exaggerated emotion: “Do you know de wae?”

I did a little double-take because as soon as he said it, there was a lot of laughter in the room. I had never heard the phrase, but I could sense immediately this was some sort of online joke, video, game or meme that was outside my field of vision.

I had three options as teacher at that moment:

The student told me the phrase was from a game that became a meme, and he assured me it was not inappropriate for school. I decided to trust him, and the phrase of “Do you know de wae?” made its way around the circle.

Later, I immediately went into Know Your Meme, a database in which memes are deconstructed and traced back to their origins. According to Know Your Meme, the “Do you know de wae?” and found that it originated from a character in a Sonic the Hedgehog game called Uganda Knuckles.

From Know Your Meme:

Ugandan Knuckles is the nickname given to a depiction of the character Knuckles from the Sonic franchise created by YouTuber Gregzilla, which is often used as an avatar by players in the multiplayer game VRChat who repeat phrases like “do you know the way” and memes associated with the country Uganda, most notably the film Who Killed Captain Alex? and Zulul. The character is associated with the expression “do you know the way”, which is typically spoken in a mock African accent and phonetically spelled as “do you know de wey.” 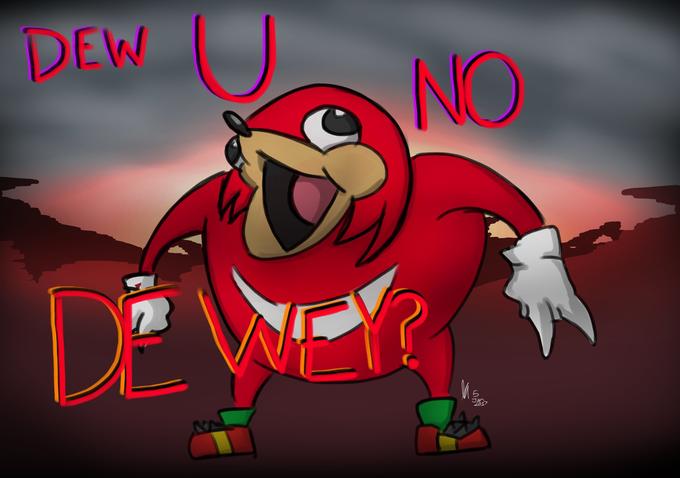 The meme has gone in all sorts of strange directions.

There have been accusations that the meme has racist overtones, however, with the pronunciation in fake African accent and may be built upon African stereotypes. Roblox, a very popular gaming platform site, apparently even banned the character from its server games because of concerns about negative stereotypes.

After talking some more with my students about using the meme, now that I had some information to speak from, I realized that they were not even aware of the racist possibilities. They were just amused by the funny character who repeats the same ridiculous phrase over and over again. Still, a discussion helped frame the meme, and I haven’t heard it in the classroom since then.

I did ask my own 13 year old son when I got home that same day if he had heard of the “Do you know de wae?” meme. He goes to a different school in a different community, with a different crowd of kids, and he immediately knew of the meme, too. (A year or so ago, we had a long discussion with him about using Pepe the Frog and he was startled by the how the far-right had appropriated that meme for its own dark purposes.) Needless to say, he immediately knew the meme and said many kids in his school were saying it in the hallways, as they moved from lockers to classrooms — sort of as a directional sarcasm of the school-day experience.

All this goes to show the cultural power of memes and the difficulty we adults have in understanding their stickiness, never mind the origins and the mad rush of social sharing across platforms. Memes often are part of the language of youth, even if they don’t always comprehend the underlying cultural appropriations and potentially negative messages embedded in the memes they use.