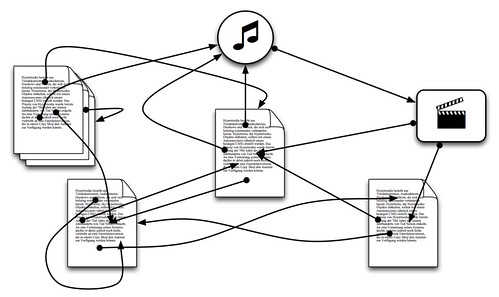 Thanks to some sharing of an article by Wendy in Networked Narratives a few weeks ago, I stumbled on this 1990 film about where hypertext might be going, with novelist Douglas Adams.

The Internet Archive site explains a bit more about Hyperland:

In this one-hour documentary produced by the BBC in 1990, Douglas falls asleep in front of a television and dreams about future time when he may be allowed to play a more active role in the information he chooses to digest. A software agent, Tom (played by Tom Baker), guides Douglas around a multimedia information landscape, examining (then) cuttting-edge research by the SF Multimedia Lab and NASA Ames research center, and encountering hypermedia visionaries such as Vannevar Bush and Ted Nelson. Looking back now, it’s interesting to see how much he got right and how much he didn’t: these days, no one’s heard of the SF Multimedia Lab, and his super-high-tech portrayal of VR in 2005 could be outdone by a modern PC with a 3D card. However, these are just minor niggles when you consider how much more popular the technologies in question have become than anyone could have predicted – for while Douglas was creating Hyperland, a student at CERN in Switzerland was working on a little hypertext project he called the World Wide Web…

Peace (link it beyond),
Kevin