Context: As a professional development facilitator with our Western Massachusetts Writing Project, I’ve too often run into situations where our teachers and programs have been shut out of computer labs for weeks at a time, all because the computers were being used for testing and data collection. Mostly, this was in our urban high-needs schools, where access to computers was already limited for many students. It drove me crazy. Now, my own school is making the shift to have students take our state’s standardized testing system (MCAS) online, with computers. During our training session yesterday after school, as we learned about the teacher portal and the student interface, it occurred to me again that the vision of how I see computers — as a means for composing with media and pushing the boundaries of what we define as writing — and how state administrators see computers — a means of gathering data on students and schools — are often in conflict with each other. On the other hand, our school community — not one to often provide money for our school, which is near the lowest in the state in per pupil expenditures — did allocate quite a bit of investment last year for new computers. However, the town did that because of the worry about state testing, not for fear that our students aren’t learning important technology and communication skills. We take what we can get, I guess, and make the most of it. 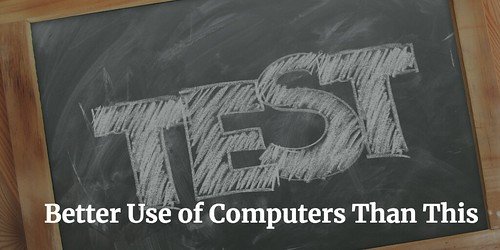 Peace (power it up),
Kevin