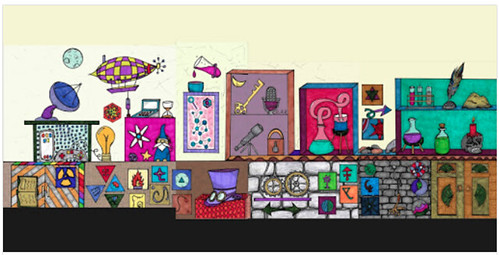 This all began when I had a crazy, inspired thought that I decided not to keep to myself (because how much fun would that be?): What if the (open and university) folks dabbling in Networked Narratives together created a collaborative piece of transmedia artwork together?

I had recently been thinking more about transmedia storytelling — about how to try to tell a story that unfolds across different digital media and mediums, each piece with the ability to stand alone and yet each piece also part of the larger story. A course I took via FutureLearn gave me some ideas, and I have tinkered with the concept before with the now-defunct Digital Writing Month.

I pitched the idea out to create an Alchemy Lab space filled with objects that could be used to inspire stories, and some of my friends — Wendy and Sarah and Todd and Susan and Niall, and others — bit. Phew. This did not seem like something one could go into alone, so I was quite happy to have partners. Ok. So, could we actually pull this off? We did, sort of, although not quite like the original vision. We centered on the term of “Mediajumping” in the early stages of our invitations to folks to collaborate.

Visit the NetNarr Alchemy Lab to see what has emerged.

Some background: Networked Narratives is a university course being taught in the US by Alan Levine and in Norway by Mia Zamora, and the NetNarr course has an open participation element to it, which I am part of. This is the second iteration of Networked Narratives.

This post is part of a series of reflections on the last six to eight weeks of work behind the scenes as we wrangled a vision of collaborative digital art and storytelling into reality. It’s also an attempt to remember what we did, and workarounds we had to find, to make the Alchemy Lab exist.

Where it worked: The original idea is that a virtual lab would become a source of a larger story — the Narrative of the Network — to be told by many people, with many different media. Originally, I wondered if we could “hand off” the story, in chapters, to the next participant in line. We have done this concept in CLMOOC with projects such as The Search for ChalkBoard Man and the DigiWriMo StoryJumpers project. Sometimes, it works. Sometimes, it doesn’t work because the common narrative threads get lost as the story moves. Sarah, in particular, really wanted something more logical, more story-centered. The use of the term “Mediajumping” in our early invititations allowed for an open invitation for folks to create with the tools they had available, and to follow their interests.

Where it didn’t work (and what we did): I don’t think we figured this out, for the “story” that emerged was more of the Lab as the anchor point for media. We decided to allow people to choose items from the lab and build media and stories around the items. The overarching narrative is that you have found a hidden lab. I pondered if we could leave clues, like easter eggs, in our media that would point a larger story. The scope and scale was too difficult to pull that off. In the end, we let it go as a media-oriented lab experience, and hoped that smaller pieces of stories might emerge. Some did. Some did not. Will someone take the smaller pieces and stitch together something larger? I don’t know.

Where it worked: Susan’s artwork of the lab (which Niall stitched into a 360 image) was stunningly beautiful, and inspirational. We knew we would have to find a means to disperse the story and the objects, so we created an collaborative document with a table, and asked folks who had signed up (via a Google Form, via an interactive story invitation in Twine) to choose an object and create. I had hoped for a wide variety of media. There were 46 items made.

Where it didn’t work (and what we did): We have a lot of GIFs in the lab, and we celebrated whenever someone added something different — like a time-lapse video poem or an interactive website. If this were our full time jobs, we would no doubt have had more variety, and I am happy with what folks made and shared. I found myself penned in a bit from time to time with how to make media, and tell a story, all with a single object as inspiration. But our unofficial tagline of “every object tells a story” still seems inspirational. I think the idea of telling a story through small media pieces like gifs and images is something we grapple with.

I’ll share some more reflections tomorrow in a second post, in which I look at topics of platform, participants and collaboration.