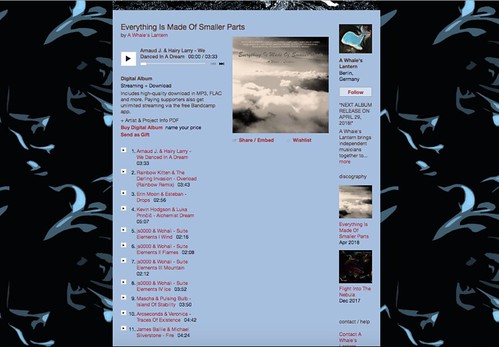 The second round of music by collaboration — known by the project title A Whale’s Lantern — has now been released, and the theme of the musical pieces was The Elements. The album is located for listening, and for downloading, at Bandcamp. The whole project is built on collaboration — from the songwriting, to the recording, to the production. Each song represents a different collaborative partnership.

I was paired up with Luka, an amazing engineer and musician from Eastern Europe, and we worked together on a song called Alchemist Dream.

I wrote the lyrics, inspired in part by the Alchemy theme of Networked Narratives, and Luka wrote the music, and then we worked via email and other means to merge the two pieces together. I sing the song, and added some sax at the end, but Luka has done everything else. The back and forth we had was intriguing in many ways, and I am pretty happy with how our track ended up. Luka deserves much of the credit for the production value, as he spent hours working on it.

If you are wondering how this all works, a call went out from our friend Mascha in the Mastodon networking space (this is the second round; the first round is entitled Flight into the Nebula, and I worked with Laura on a song I wrote called I Fall Apart).

Participants are given rather random partners, and an extended period of time to work together. Some partnerships don’t get the finish line for all sorts of reasons. This second round had more completed tracks than the first.

The songs are then pulled together (by Mascha, who is the heart and soul of this project) on Bandcamp for sharing, and for purchase, with some proceeds going back into supporting the Mastodon network.

I hope you enjoy the music and the stories of how these pieces came together. Indeed, everything is made of smaller parts.