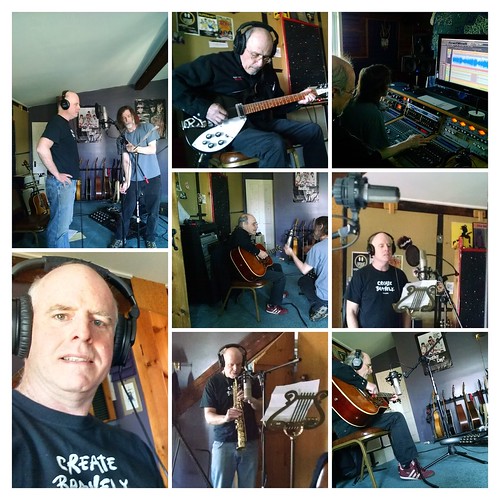 My friend, John, and I spent a few hours yesterday afternoon inside a music recording studio of a local musician. Years ago, John and I wrote a song together (we’ve written many), and it has been his long ambition to record and release this particular song. Yesterday, we worked on laying down the vocals, saxophone and guitar tracks. The goal is release the song later this year, in time for the winter holidays, as the song is a holiday-themed song, with peace and love at its center.

I am always intrigued by music engineers and their studios, and the set-up in a third-floor loft overlooking our city’s downtown area was pretty cool. Actually, it’s right above the downtown music store, where Jim (the engineer) used to work. The scene was laid back, comfortable, and the engineer/producer is an amazing musician himself, so his feedback was helpful.

John and I also remembered some other studio sessions with past bands (he and I have been playing music for years) and I went and dug up a video I had made from long ago for a band we were in called The Sofa Kings. This video was created during a time when I was experimenting with a Flip video camera (the little white ones) was something completely new, and phones weren’t made for video quite yet (unless you had money to burn). The sound quality is terrible, but the moment in time captured (for us) is priceless.