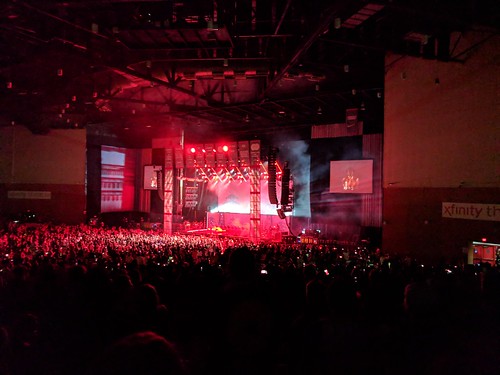 This Pulitzer-prize winning writer gets loud and indignant with his words, and pushes the envelope on what it means to be a young black artist in the world of Trump, and Black Lives Matter, and frustration over inequities. This writer uses black history as cultural reference points, and brings in the urban experience as a narrative frame. His words resonate with a large, and growing, audience.

This is Kendrick Lamar.

I was thinking of this whole Pulitzer Prize last night as my son and I, and thousands of other fans, rapped along with Kendrick during a concert in Connecticut. (Let me revise: I danced my white man’s dance to the beat, but I didn’t know the lyrics well enough to rap along with him with any coherence … I was surprised how many times the audience took the ‘mic’ from Kendrick during songs, on his invitation, and easily knew the words, the whole stadium in tandem, one voice.)

I remembered, and agreed, with something that commentator Clay Cane wrote in CNN when Lamar’s Pulitzer Prize for Music award was announced:

Like Nina Simone, Lamar isn’t a passive, woe-is-me voice; he is equally outraged and inspired, unapologetically angry but ready to create change. — https://www.cnn.com/2018/04/16/opinions/kendrick-lamar-pulitzer-cane/index.html

So true, and it was clear, this audience was with him.

Kendrick even poked fun at the award itself at one point last night, using a “Pulitzer Kenny” sign on the backdrop as he showed off his verbal dexterity with words, creating rhythms that, even if difficult to hear the lyrics in this live setting, impressed the ears. He can spin rhymes, and those rhymes tell stories, and those stories resonate with his audience.

That’s what writers do.

One more note: The last time I took my 13 year old son to a hip hop show (it was Future as the main act), I was disappointed (but not surprised) that the entire music element was tracked songs. No live musicians.

Not for Kendrick (who has worked with some pretty impressive musicians on his albums). Lamar had an amazing backing band — bass, guitar, drums, keys — that kept the groove kicking it all night long. The drummer, in particular, was incredible, powering the songs with a beat you could feel in your chest.

Peace (inside the beat),
Kevin