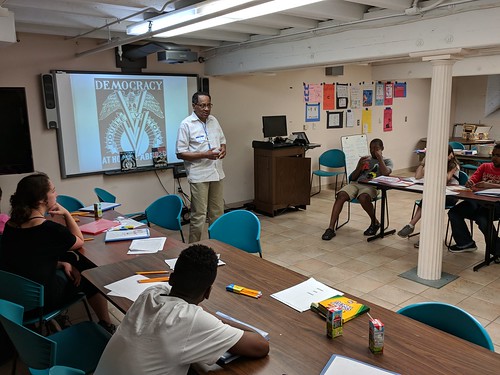 At our summer camp at the Springfield Armory, where our themes all week have centered on social justice issues, middle school campers explored the notions of the Double V Campaign — when returning WW2 African American veterans searched for racial equality and respect, and the end to segregation, at the home-front after serving as heroes in the war.

Our visitor — Lee Hines — is part of the Veterans Education Project, and he has done extensive research on the Double V. Hines is also a decorated veteran of the Vietnam War. He flew airplanes and helicopters over Laos, Thailand and Vietnam. In his talk with the camp, Hines notes the ways the African American soldiers of WW2 paved the way for the Civil Rights Movement, and how the Double V Campaign sparked dissent in our country and caused government officials like FBI Director Edgar Hoover to move to squelch it.

Earlier, we had watched a powerful digital film created for National History Day by other middle school students on the topic of the Tuskegee Airmen, whose heroism is now celebrated but whose existence at the time was the cause for much argument around segregation, military service and more. Our campers come from a social justice middle school, so these topics resonated with them.

Following Hines’ talk, we had students create their own versions of a Double V Campaign poster, in hopes of getting them think about all of those brave men, and women, who fought against evil in the war and then came home, and fought against injustice in their own communities. 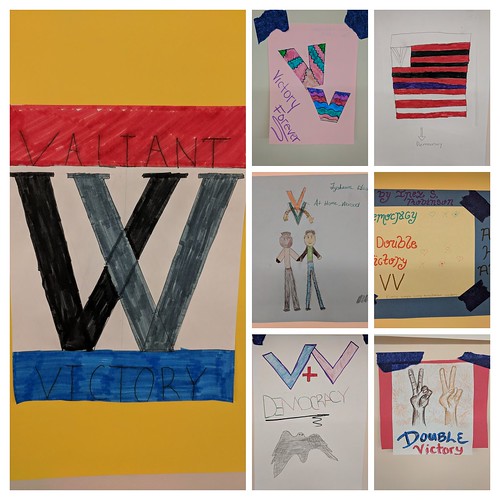 This is the second year of our Minds Made for Stories project, which is funded by the Mass Humanities organization with support by the National Writing Project and the National Park Service. I am the head facilitator of the camp through my work with the Western Massachusetts Writing Project, and our student campers all come from a social justice magnet school in our main urban center, Springfield, Massachusetts.